Four Cavs sign to continue to play sports in college

FLINT TWP. – National Signing Day took place last Wednesday across the county and Carman-Ainsworth recognized four of its athletes who signed letters-of-intent to play college sports. Troy Brown and Ahmard Clay will hit the gridiron and Caity Cox and Montana Andrews will take her bowling careers to the next level.

Brown will play football at Central Michigan and major in business or athletic training after considering Howard, Iowa and Morgan State. He said CMU felt like family and had a great atmosphere. He said his biggest challenge will be the transition into school and sports at the college level, but he’s just excited for the experience.

Brown said he’s been told he could see a high chance of minutes on the field but like everyone else will have to work for a starting spot. He’s up for the challenge, though, and isn’t afraid of hard work as a multi-sport athlete who plays basketball and runs track. Brown said he loves to sleep and eat, so balancing out college life should be a fun experience for him. 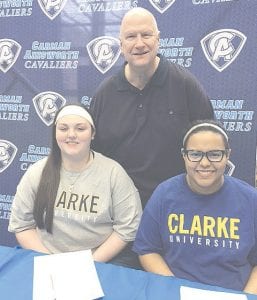 Clay will play football at Concordia after also looking at Eastern and Western Michigan.

“Concordia gave me an opportunity and I appreciate that, so I really just trust them and want to make the best of it,” said Brown of Concordia.

Clay will study biology and says it’s something he’s wanted to do something with after high school, possibly as a marine biologist.

His biggest challenge? “Staying focused when I have homework due, pretty much time management,” Clay said.

As far as his chances as a starter, Clay said, “the best man will play, so I’m going to work to be that best man.”

Clay, not unlike the others, wanted to thank his family for helping him realize his dreams.

Cox will bowl at Clarke University. She also looked at Spring Arbor, Indiana Tech, Concordia and Hungtington, but “fell in love with the campus and the food”.

A psychology major, Cox said her biggest adjustment will be in leaving family and other bowling activities behind. She also said she’s just excited about being in a new state and experience a new kind of school, but nervous about the distance from home.

Cox also stressed that she will have to work hard for a spot in the starting lineup. She’s not afraid of that and has the chops to get it done as a Michigan State Teen Masters Champion. She’s also had great coaching from some of the area’s best and wanted to especially thank Richard Women, Robert Tubbs, Gordy Kaufman and Paul Ballard. Mom and dad also get thanks for everything they have done to see their daughter realize her dream of a college sports career.

Andrews looked at the same schools as Cox and said she just wanted to stay close with friends. She’ll also study biology and says her biggest challenge will just be in traveling to her new school.

“I’m excited to bowl and compete at the college level,” Andrews said. She also thanked the group of coaches that have helped her and Cox. They also helped her improve her game to the point that she rolled her highest score of the season recently.