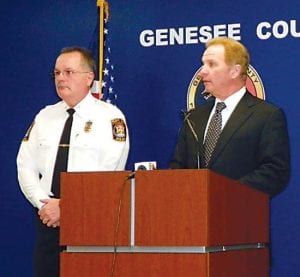 Leyton said Mills was shot four times inside her car then shoved out of the vehicle which was then driven away by one of her assailants. Police investigators found the blood-soaked car a short time later at the Economy Motel on Corunna Road about a half a block west of the gas station.

Mills died in the ambulance en route to the hospital but made what Leyton called “a dying declaration’’ that will be used as evidence in prosecuting her assailants.

Riselay and Johnson, were identified as the shooters in Mills death.

Leyton said police think Johnson approached Mills car and somehow gained access through the passenger door. Riselay then shot her once through the open door, dropped the gun and ran.

Johnson allegedly picked up the gun, shot Mills three more times, pushed her out of the vehicle, and drove the car away, Leyton said.

Horn is believed to have supplied the gun and instructed Johnson and Riselay to use it to carjack a vehicle for him in exchange for drugs.

Riselay, Johnson and Horn were each charged with five counts including felony murder which carries a sentence of life without parole, if convicted. Each of them also were charged with open murder, carjacking, carrying a concealed weapon and felony firearm.

Eason was charged with accessory after the fact, felon in possession of a firearm (both five-year felonies); and felony firearm which carries a mandatory sentence of two years in prison consecutive to underlying felonies. He is charged with attempting to dispose of the suspected murder weapon that since has been recovered by authorities.

The four were arraigned Wednesday in the courtroom of Genesee District Judge David J. Goggins who denied bond for Riselay, Johnson and Horn and set bond for Eason in excess of $200,000.

Leyton praised the Flint Township Police Department for working tirelessly around the clock to gather evidence leading to the arrests of four suspects early Monday morning and Riselay on Monday night.

Leyton said that one of six suspects taken into custody during the investigation will not be charged and another remains a person of interest.

“I just want the public to know how hard the Flint Township Police Department worked in an effort to find some justice for the Mills family and to assure the community that everything has been one to bring in the heinous killers that we will now prosecute to the fullest extent of the law.

Flint Township Police Chief George Sippert and several detectives involved in the case attended the press conference and the arraignment that followed.

Chief Sippert said it was a 100 percent team effort by everyone involved, including the prosecutor’s’ office.