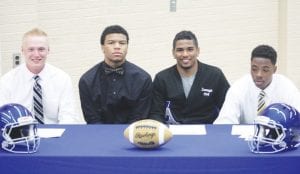 The four signers on May 7 were (left to right) Connor Storms, Jerron Thomas, Lorenzo Redmond and Bryant Hudson.

FLINT TWP. – Carman- Ainsworth is sending enough football players to college next year to put a full team on the field.

Four more Cavaliers announced last Wednesday they would be playing at the next level, joining the seven players who signed letters of intent in February. Jerron Thomas will play at Campbellsville (Ky.) University, Bryant Hudson will attend Concordia University in Ann Arbor, Lorenzo Redmond is headed for Kalamazoo College and Connor Storms will play at Adrian College.

All 11 were part of a record season last fall in which Carman-Ainsworth won its first regional championship and went 11-2, reaching the Div. 1 semifinals.

Hudson and Thomas based their choices partly on a desire to play two sports in college. Hudson, a wide receiver, also runs the hurdles in track, and Thomas, a lineman, was a 215- pound state placer in wrestling.

“Concordia offered more because I’ll be playing two sports,” he said. “I visited there and really liked the overall environment. It’s not too big and not too small.”

“They have a nice community and a nice field down there,” he said.

Thomas is undecided on a major.

“I didn’t really pick Kalamazoo for my football career but mostly for academics,” said Redmond, a running back and linebacker who will study biology or engineering. “I use football as a means to build upon goals and acquire what I want.”

Storms had his eye on Michigan State after attending a kicking camp there and being selected one of five finalists from a group of 180. He also visited Concordia and Findlay, Ohio.

“I had Michigan State in my sights for a long time until they signed the guy that beat me out at their kicking camp last summer,” he said. “But I got another opportunity at Adrian.

“I like the facilities there. They’re putting in a new weight room within my four years. They’re going to be traveling around for games to Oregon and Florida. It’s not going to be the typical D3 school. It will be a D1 atmosphere and I look forward to winning championships.”

Storms will major in criminal justice with plans to become a police officer.

Coach Nate Williams has sent a steady stream of players into the college ranks during his tenure as coach, but that’s just a byproduct of his program.

“I just want to get the kids into love of the game – love it and play it as if nobody’s watching you,” he said. “Then, if you say you don’t want it to end after high school, then let’s work hard to find you another place where you can continue.

“At the end of the day, as long as they’re going to school and getting that degree and an education, that’s what it’s all about.”