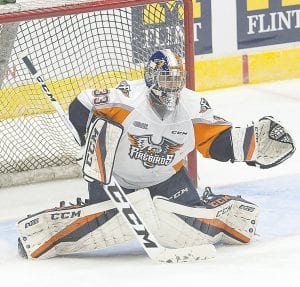 Flint’s Garrett Forrest slides across the crease to make a glove save.

FLINT – Four straight goals led the Flint Firebirds to a 4-2 OHL hockey victory over the Windsor Spitfires at the Dort Federal Event Center on Sunday. Jacob Collins’ tally would be the only goal of the opening frame while CJ Clarke netter the lone second period score.

Within the first four minutes of the final period, though, is when Flint buried the Spitfires. Jack Wismer’s goal came just :37 into the frame before Connor Roberts netted one at 4:18 to craft a 4-0 lead. Curtis Douglas and Connor Carcoran converted a couple of cosmetic goals later in the period, but it was too little, too late.

Lake Cavallin made 29 saves between the pipes.

At home on Saturday, the Firebirds battled in a 5-3 loss to the Kitchener Rangers. Logan Brown gave Kitchener an early lead before Nikita Alexandrov got the equalizer just moments later. Less than five minutes after that, Riley McCourt gave the Firebirds their first lead of the night.

Adam Mascherin’s goal at 14:41 tied it back up heading into the intermission. Nick McHugh took the lead back for the Rangers in the middle stanza, followed by Mascherin adding his second of the night in the third period. Ty Dellandrea registered a shorthanded goal, but Brown put it away with the insurance tally in the final two minutes.

Friday’s game also turned out to be a 5-3 loss, this time at the Guelph Storm. Isaac Ratcliffe and Alexey Toropchenko both notched early goals to put Guelph up 2-0, but Connor Roberts’ goal would chip Flint’s deficit back down to one. That is, before Ratcliffe got his second of the night to give the Storm a 3-1 edge after one.

Roberts added another in the second, but Cedric Ralph once again put the Storm up by a pair. Jalen Smereck brought the Firebirds back to within one less than two minutes into the final frame, however, Ratcliffe got the hat trick on the power play.

Flint remains in last place in the Western Conference at 14-29-3-1 for 32 points as they host Saginaw on Wednesday, Sarnia on Friday and travel to Saginaw on Saturday.