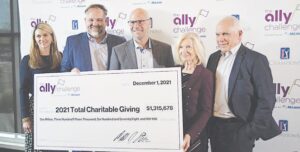 FENTON — For the second time in its brief history, the Ally Challenge has surpassed the $1 million mark in charitable giving totals.

At a press event held in Fenton on Dec. 1, tournament officials announced that the 4th Annual Ally Challenge presented by McLaren raised more than $1.3 million in 2021.

More than 20 charities benefited from the PGA Tour Champions event, which was held at Warwick Hills Golf & Country Club in Grand Blanc Township from Aug. 23-29.

Altogether, $440,000 of the $1.3 million total went to the tournament’s primary beneficiary, the United Way of Genesee County (UWGC).

Jamie Gaskin, CEO of UWGC, said that funds raised by the Ally Challenge will support over 20 programs in Genesee County and impact more than 20,000 individuals through three priority areas: financial literacy, housing and employment.

“Thank you to all the fans, players and sponsors who attended the 2021 Ally Challenge,” he said. “Your participation is helping homeless veterans get back on their feet at My Brother’s Keeper; supporting minor home repairs with Habitat for Humanity; teaching kids the importance of fiscal management; and 15 other crucial programs helping our most vulnerable neighbors.”

Birdies for Charity presented by Ally accounted for $601,072 of the total donation mark, thanks to 862 birdies recorded by PGA Tour Champions players during competitive rounds. A total of 17 qualified Michigan 501(c)(3) charities participated in the program in 2021.

“When people went online to purchase tickets, they had an opportunity to choose the charity of their choice—so their donation was made from those proceeds,” said Matt Stepnes, tournament director for the Ally Challenge. “We also had net proceeds gathered from the hospitality tents, and our pro-am was a big revenue generator (for fundraising).”

Fundraising totals from the tournament also included $100,000 to four charities ($25,000 each), which were designated by the celebrities who participated in the 2021 Ally Challenge Celebrity Shootout.

“The competition on the course and the energy of tournament week this year was incredible, but it’s the sincere and sustaining impact created by the dollars raised for charity that’s most important, and the tournament is committed to growing that charitable spirit for years to come,” said Stepnes.

Since its inception in 2018, The Ally Challenge presented by McLaren has donated more than $4.5 million to support local charities in the greater Flint area and beyond.

Preparations for the 2022 Ally Challenge presented by McLaren are already underway for week of Aug. 22-28 at Warwick Hills. All three rounds of the tournament will be broadcast on Golf Channel.