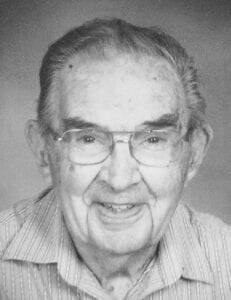 He was preceded in death by his parents; wife, Allene J. Jackson; brothers, Stewart, William, Donald and Norman.

Homer taught school, coached at Otisville 1947-49, later Davison 1952-57, Spring Arbor College brought many responsibilities (Coaching, Athletic director, Dean of Students and Director of Admissions) from 1957-1987. Dad started the Baseball program at Spring Arbor College in l961. He was a member of Spring Arbor Free Methodist Church. Dad was not one to stay idle. He organized mission trips to Haiti, Africa, Mississippi, Georgia, Louisiana, Mexico and Brazil. He also volunteered his time at Western Elementary Schools and the food pantry at Spring Arbor Free Methodist Church. He enjoyed woodworking, camping, sports and traveling the world.

Memorial Contributions may be made to the Homer and Allene Jackson Scholarship fund at Spring Arbor University, 106 E. Main St., Spring Arbor, MI 49283.

A celebration of Dad’s life will be announced at a later date.

Arrangements are with Watson Funeral Chapel in Jackson. You are invited to express your condolences to the family at www.watsonfuneral chapels.com.