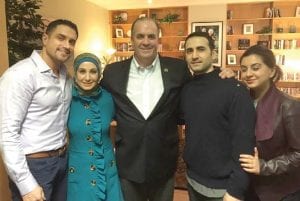 FLINT TWP. — After four and a half years in an Iranian prison, Amir Hekmati, formerly of Flint Township, was one of four Americans released in a prisoner exchange last week.

“Amir Hekmati is coming home,” Kildee, said in a press release. “I am overcome with emotion that after four and a half years, this terrible ordeal is ending and the Hekmati family will soon be reunited with Amir. We have worked so hard to see this day happen. I am incredibly grateful to everyone, including my staff, who worked tirelessly to secure Amir’s release.”

Kildee also expressed gratitude to U.S. President Barack Obama, Secretary of State John Kerry and the entire Administration for never giving up on Amir and the other Americans that were held in Iran.

“Their tireless work should be commended,” he said.

On Monday, Kildee traveled with members of the Hekmati family to Germany to reunite with Amir Hekmati and bring him home. There’s been no word yet on when that will be.

The Hekmati family has vigorously advocated for Amir Hekmati’s release since learning in August 2011 that he had been accused of being a spy for the CIA, imprisoned and sentenced to death. The sentence was later changed to ten years in prison.

The Hekmati’s vigorously asserted from the beginning of the ordeal that their son, an ex-Marine, was innocent. He was in Iran visiting relatives before returning to the states to attend college, they said.

Congressman Kildee took up the cause of the Hekmati to advocate on a nation- al platform for the release of Amir Hekmati.

On Monday, Kildee and members of the Hekmati family were able to spend about 15 minutes with Amir Hekmati at Landstuhl Regional Medical Center in Germany.

“To say that the campus community is overjoyed is an understatement,” said MCC President, Dr. Beverly Walker- Griffea, in a press release. “Many faculty and staff members have supported the Hekmati family during these difficult four years, and we are truly thankful that Amir has been released.”

On behalf of the MCC Board of Trustees, Dr. John Snell stated: “The Board of Trustees celebrate with the Hekmati family the release of their son and brother. “Amir Hekmati is part of our extended Mott family and we are grateful he will be home soon.”

MCC has been active in advocating for Amir’s release and supporting the Hekmati family. A benefit dinner to help raise funds for Amir’s legal defense was held on campus April 26, 2012. The keynote address was given by his attorney, Ambassador Pierre-Richard Prosper, U.S. Ambassador-at-Large in charge of the U.S. Department of State’s Office of War Crimes Issues. MCC also hosted a Candlelight Vigil for the Hekmati Family on Sept. 25, 2012.

Most recently, the MCC Concert Choir and Chamber Singers presented “Songs of Inspiration, Justice, and Hope” at their annual Spring Concert April 27, 2015 featuring a performance of “I Will Fly (Amir’s Song),” which was written by Dr. Matthew Packer, Music instructor, to stand in solidarity with Amir and his family.