Freeman looks back on career as June 30 retirement approaches 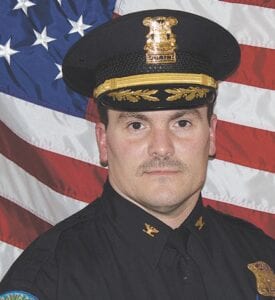 DAVISON TWP. — Rick Freeman said he hopes he’s leaving the Davison Township Police Department even better than when he assumed the reins as chief nine years ago.

After 30 years in law enforcement, 25 of those with the township police, Freeman will retire as chief on June 30, ending what he calls a “blessed career.”

His decision to retire at 50 wasn’t something profound or necessary due to health or other circumstances – it was simply just time to go.

“Someone once told me you’ll know when it’s time and for me, it’s kind of there,” said Freeman. “All the factors for me, both professionally and personally, the moon and the stars all aligned, as they say – it’s just time.”

Well it was certainly not the only factor considered, but Freeman admits the current climate for law enforcement in the nation “didn’t hinder that decision and the confirmation of that decision.”

Freeman said he thinks the current negative backlash against law enforcement in the United States is something that will pass.

He said he remembers shortly after he became a police officer, working for the Flint Police Department right out of college in 1991, the Rodney King incident happened in Los Angeles and it sparked a great deal of ill-will toward police.

“I remember similar conversations back then, which from our perspective law enforcement strives and take great pains to improve and I am always of the belief we can improve,” he said. “I especially believe, as I rose through the ranks now ultimately ending up as chief and an executive board member of the State of Michigan Chiefs Association, I know firsthand we always strive to improve and learn from our mistakes.”

Freeman admits some of the recent incidents have made it clear there’s still work to be done, but he said looking at the facts he thinks law enforcement is “light years” ahead of what it’s getting credit for right now, unfortunately.

“I truly believe this is temporary and the reality will come out in the end. We’ll be better for it,” said Freeman.

Over the years, Freeman said he has seen many changes in policing, especially in terms of cooperation and communication between different levels of law enforcement.

“What I can tell you I’ve seen change is a vast improvement with how we provide our service, what we look at in order to prevent crimes and react to crime,” said Freeman. “Ten years into my career were the 9/11 attacks, so I really got to see the cooperation change between local, state and federal police and all the strides made in improving how we respond and how we communicate beforehand. That was very impressive to be part of and see those improvements.”

Freeman said he’d like to think, as a local police chief, he made a direct impact on those types of things.

“At least I was part of the bigger picture and hopefully we’ve prevented a lot in this country and saved a lot of lives in law enforcement with those actions,” he said. “Communication, the technology and the cooperation between the different levels of law enforcement was great to see.”

Freeman said he became a police officer because it was what he’d always wanted to do since the time he was a child.

When he finished high school, he said it was no surprise to anyone who knew him that he would go into law enforcement.

“I don’t remember ever wanting to do anything else,” said Freeman. “I have two awesome parents who instilled right from wrong in me. I just wanted to help people. To go into this field where you can not only help people, but help be that line between right and wrong.”

He said he was at Mott Community College studying criminal justice when he was hired by the Flint Police Department in January of 1991, sending him off on his career.

Freeman was hired by then Davison Township Police Chief Larry Hrinik in June 1996 as a patrol officer. He’s been with the department since, having risen through the ranks to become the department’s first deputy chief and then assuming the role of chief in 2012 upon Hrinik’s retirement.

“When I’ve looked back, I’ve had a blessed career, not to sound redundant, but one of those blessings was my predecessor handed me a good ship, as they say,” said Freeman. “The direction of the ship was already set, I agreed with that direction. Over the last nine years I’ve just tried to build upon what I was handed, and again I was fortunate and blessed with that.

“I’m hoping I only maintained or improved that, I guess history will tell,” said Freeman. “But hopefully I’m doing the same now for my successor that was done for me – a good department that is professional and has high standards and again, hopefully making that transition easy for my successor.”

Freeman is married to wife, Diane, and they have two daughters, Morgan and Madison. He said besides spending more time with his family, church and recreation, he’ll also be taking on a part-time job running the property room for the Flint Area Narcotics Group (FANG).

Upon his retirement at the end of June, Freeman will be replaced by incoming chief Jay Rendon, who has been with the department for 26 years.

Freeman said he has been imparting words of wisdom to Rendon in the days leading up to the transition to the new chief’s tenure, but there’s only one statement he said that truly sticks out as good advice to the new chief.

“Stick to what you know is right and remember our oath – it’s really that simple.”