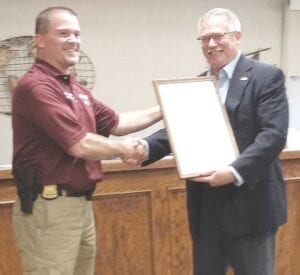 DAVISON TWP. — The Board of Trustees passed a resolution, June 14, recognizing retiring Police Chief Rick Freeman for his years of service to the community.

Additionally, State Rep. David Martin (R-Davison) was on hand to present Freeman with a tribute from the State House of Representatives for his retirement after 30 years of police work.

The resolution passed by the board was read by Supervisor Jim Slezak who recognized Freeman’s career, which began as a patrol officer with the Flint Police Department in 1991. He then became a patrol officer in Davison Township in 1996. And was promoted to lieutenant there in December of 1999.

After 10 years as lieutenant he was promoted to deputy chief 2009 and after only three years as deputy chief, Freeman became the chief following the retirement of then- Police Chief Larry Hrinik in July 2012.

Slezak noted that Freeman has served on multiple boards across the county and state, including his current term on the executive board of the Michigan Association of Chiefs of Police. He is married to wife Diane, and they have two daughters, Morgan and Madison.

“Chief Freeman has always been a man devout to his faith, family and community,” said Slezak, reading the resolution to the board. “Now, therefore, be it resolved that the township of Davison expresses its gratitude and appreciation for Chief Freeman for his years of spirited dedication, hard work and loyalty to Davison Township.”

He added the board, police department and all other employees of Davison Township wish to express their best wishes to Freeman for a “long and happy retirement.”

Martin referred to Freeman as one of the “all around good guys”, who has been helpful to him since becoming state representative through feedback he offers from the chief of police association.

Freeman thanked those involved with both tributes and said he is preparing for his departure from his office on June 30.

“We’re getting things started and getting ready to turn over the reins,” said Freeman. “I’m making sure everything is in tip top shape when I’m ready to leave.

“I’ll save the blubbering maybe for next week, but I’ll say, and you know I’ve said it before and it’s not cliché, working for this community has been a blessing for me both personally and professionally.”

When Freeman officially retires June 30, Lt. Jay Rendon will be sworn in as the new chief of police. A 26-year veteran of the department, Rendon was offered and accepted the chief’s job last month.