Freeman to retire as police chief in June

Rendon considering offer by township board 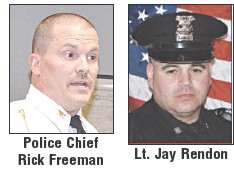 DAVISON TWP. — Police Chief Rick Freeman will retire effective June 30, prompting the Board of Trustees to seek internal applicants for the job.

Freeman announced his retirement after more than 30 years in law enforcement, 25 of those years with the Davison Township Police Department, the past nine years as chief.

“I rose through the ranks here, blazed a couple of trails,” said Freeman. “I was the first officer promoted to lieutenant and the first to be deputy chief.”

Both positions he said were created as the department grew.

Freeman added his retirement has nothing to do with the recent change in leadership at the township after four of the five members of the board were newly elected in November.

“It’s just my time,” he said. “It’s time for a new chapter for me. I truly love this career, but it can use a fresh perspective.”

The board met April 16 to interview the sole applicant from the department, Lt. Jay Rendon, and extended a conditional offer to him following that interview, said Supervisor Jim Slezak.

The board expects to hear Rendon’s decision by or before it’s May 10 meeting.

If he accepts, Rendon will become chief on July 1.

Freeman said since the end of November he’s had a good relationship with the new board and wishes Rendon the best of luck with the job, if he chooses to accept the township’s offer.