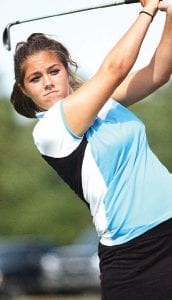 Freshman Meghan Borgerding opens the season as Carman-Ainsworth’s No. 1 player.

FLINT TWP.
— Bob Blaylock was disappointed when he learned two of his top golfers weren’t returning to Carman-Ainsworth this year.

But his mood brightened considerably with the arrival of freshman Meghan Borgerding to the program.

Borgerding instantly stamped herself No. 1 in the Lady Cavaliers’ lineup and justified that honor with a 43 in the team’s season opener at Tyrone Hills on Tuesday. The 14-year-old has been playing since she was “3 or 4,” she said, and has competed in the Flint Junior Golf Association.

“She’s a competitive player and she’s going to be very good if she works on her game like she plans on doing,” said Blaylock. “She likes the game, and her parents are real involved in her golf game.”

The new arrival softened the blow of losing Tina Reyes and junior Rebecca Robinson, both of whom transferred to other area schools. Blaylock also won’t have Tanara Crawford until the senior returns from Georgia next week. Crawford is the only returning player with varsity experience.

That hurt the Lady Cavs in their opener, which they played with only three golfers and thus forfeited to Fenton. Senior Kelsey Christensen shot 65 and junior Danielle Sims, 62.

“I had two other players, but I didn’t feel they were ready for varsity competition yet,” Blaylock said.

“Really, half the girls that come out don’t have golf clubs. We just try to get them started in the game and hopefully they catch on and make golf a life sport.”

The Lady Cavs didn’t win a match last year, but they figured to be competitive this fall until they lost the two transfers.

Still, they have a chance to be represented in the state meet by their talented freshman. It’s only nine holes, but Borgerding’s opening score indicates top-10 potential in a Div. 1 regional.