From biggest to smallest, league changes aplenty coming in 2018-19 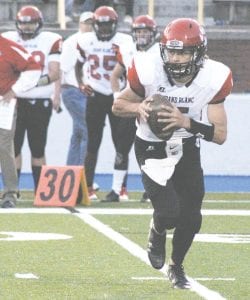 Old rivalries will be renewed when Grand Blanc joins the Saginaw Valley League for the 2018-19 season.

AREAWIDE – Conference changes within the area have been going on for several years now and this coming school year will be no different.

Leagues fall apart, leagues emerge, teams move on to a more beneficial situation and teams literally get voted out of their league.

Announced last summer, a new league will emerge this fall known as the Mid-Michigan Activities Conference. It will consist of several former members of the Genesee Area Conference, including Byron, Durand, Montrose, Mt. Morris, New Lothrop and LakeVille. Joining the ex-GAC schools in the MMAC will be Chesaning and Ovid-Else.

The mass exodus from the GAC nearly collapsed the league, but it has found a way to tentatively exist for at least one more year. The GAC was once a large league that was divided up based on enrollment. The enrollment rules are still in place, but the divisions are far smaller.

The Blue Division may as well be called the Flint-Burton division, consisting of only Flint Beecher, Flint Hamady, Bendle, Bentley and Atherton. The Red Division has one fewer school with returning members Corunna, Goodrich and Lake Fenton and the shocking addition of Pontiac Notre Dame Prep.

Notre Dame was likely tired of forming its own schedule as an independent, which was probably its motivation for joining. However, the league games will be way out of the way for the Fighting Irish and it only provides three league games, so they still have to find six more opponents.

The Saginaw Valley League has been constantly evolving over the last eight years and continues to do so. This past school year, the SVL welcomed Bay City John Glenn, and this coming fall, will do the same for Grand Blanc, which was voted out of the Kensington Lakes Activities Association due to high enrollment and geographical inconvenience for the rest of the league.

The other division is more Flintarea centric with the likes of Davison, Carman-Ainsworth, Flint Powers Catholic, Flint, Grand Blanc, Lapeer – and unfortunately for them – Saginaw Arthur Hill. The Lumberjacks are the one blip on the new SVL radar, as they will be highly inconvenienced by the new football divisions.

The Blue Water Area Conference also gains a new program with North Branch, which has departed the Tri- Valley Conference-East. The Broncos are entering a very competitive league, but it will also be a lot easier on their travel budget.

The opening in the BWAC was left when Capac decided to depart to the Greater Thumb Conference. The Chiefs have long been associated with the teams in the BWAC, but their enrollment has dipped and they feel as if they’ll be on a more level playing field in the GTC.

Lastly, the North Central Thumb League continues to see expansion with the additions of Genesee and Mt. Pleasant Sacred Heart.