From garage to distribution center: Residential Skirting catches on 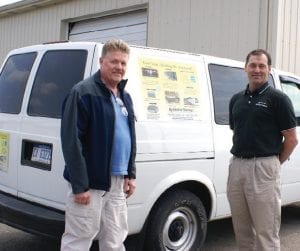 Residential Skirting Products, a Dort Highway-based business, has won two awards in the past year from Michigan organizations.

“We’ve always been working out of our garages basically. This is a transition for us,” said Powers.

In the mid-90s, Powers was in the manufactured home warranty service industry when he began noticing how unsightly and unstable traditional tin and vinyl skirting was.

It wasn’t until 2002, when he met Cassels at a fellowship dinner, that Powers got serious about realizing his home improvement idea.

“That old stuff just doesn’t do much,” Powers said. “This is very much an innovation product.”

Together with Cassels, the two came up with a way to fabricate a new skirting that allows the usually unused space under a manufactured home to become an energy efficient crawl space.

Cassels, formerly a journeyman master welder with General Motors, devised the method of welding the fixtures together.

The frame assembly was eventually patented in a two year process and the two began renting an office and distribution center.

Powers and Cassels use galvanized steel, foam board and polycarbonate paneling to create a dead air space in between the bottom of a home and the ground below. They also use plastic to create a ground vapor barrier to keep moisture out and install a humidity fan underneath the home.

The finishing touch is an access door that allows for easier access to the pipes on the underbelly of the house.

“The old way of doing it actually conducted heat away from the home,” said Powers. “There was also a lot of damage because there was no support underneath.”

He said their method is like an extension of an exterior wall, allowing for freezing temperatures, the base is able to move with freezing and thawing ground temperatures, eliminating heave damage and buckling.

Customers have reported their heating bills reduced as much as 50 percent. Additionally, the improved skirting qualifies virtually all of their customers for a home energy tax credit.

However practical Cassels and Powers seem, they’ve also managed to incorporate style into their product. The skirting is available in 24 different styles that mimic stone and brick foundations.

“Just something to make the neighbors jealous,” Cassels jokes.

“It’s an underserved population,” said Cassels, who reports getting calls from 35 different states over their product.

They’ve recently enlisted the help of an attorney to license Residential Skirting Products in other locations. They plan to keep headquarters in Genesee County.

“The market is really good for it. We want to establish ourselves in the state before going beyond local borders,” said Powers.

Residential Skirting Products can be reached at 810-624-1243 or www.residentialskirting.com.