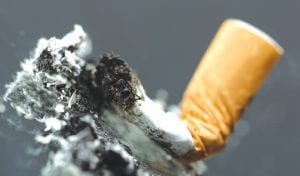 GENESEE COUNTY — Eighteen-year-olds, as of now, can still buy tobacco products in Genesee County, after a ruling Monday by Seventh Circuit Court Judge Judith Fullerton put a halt to the divisive Tobacco 21 ordinance.

The Genesee County Board of Commissioners passed a 7-2 vote for the new purchasing age back in February, despite warnings from two Republican commissioners – Drew Shapiro, district 6, and David Martin, district 9 – it could signal legal trouble for the county. Michigan Attorney General Bill Schuette said the ordinance conflicts with state law.

Tobacco 21, however, was put on hold after Michiganbased RPF Oil Company filed a lawsuit against the county for violating the Age of Majority Act under state law, which states 18 year-olds are legal adults “for all purposes whatsoever.”

RPF’s Attorney Clifford Knaggs said the problem has nothing to do with sales or smoking – it is the local board exceeding their power.

“This is a government issue of overreaching authority,” said Knaggs.

Knaggs said agents from the Genesee County Health Department visited gas station attendants, bringing with them a document warning clerks of the potential violations before the ordinance was made official.

The attorney filed a temporary restraining order on the county attempting to enforce Tobacco 21 with the lawsuit remained in effect.

Genesee County Board of Commissioners Chairman Mark Young said the board will seek to coordinate with groups such as the American Heart Association, the American Lung Association and the Tobacco Free Kids Group to continue attempting to push the legislation forward. Young said the Board of Commissioners could speak on the matter as early as Monday, and a closed session might be in order to discuss further strategy.

“I believe they are trying to take advantage of us, out of the 245 municipalities [considering Tobacco 21], because we have hit with the hardest economic downturn,” said Young.

Young said, considering most smokers start before the age of 21 and the risk of health complications runs so high, the ordinance could save millions for the state.

Knaggs said the state law changing is the most foolproof way to raise the smoking age, and he does not take issue with the idea in principle. Tommy Bran, R-Wyoming in the Michigan House of Representatives, revealed a state bill to raise the Michigan smoking age to 21 this month.

“[Genesee County] should absolutely be lobbying the state legislature if they want to pass this,” said Knaggs. “I don’t have a problem with that.”