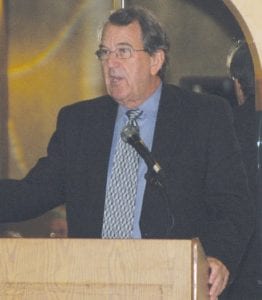 GRAND BLANC — Since retiring from the University of Michigan football program in January 2008, former head coach Lloyd Carr and his wife Laurie have been helping raise funds for the brand-new 1.1 million square foot C.S. Mott Children’s Hospital scheduled to open in November on the U-of-M campus.

While this journey has taken the pair across the country and back, last Thursday Lloyd Carr spoke at the UM Club of Greater Flint’s Past President’s Dinner at the Genesys Conference and Banquet Center, 805 Health Park Blvd., allowing his fellow Wolverines a rare glimpse into what truly makes him tick.

“It’s always great for me to come back to Flint because it’s a special place in my life. In 1968 I was 23 years old, and I was teaching in the Detroit Public Schools System and I met a guy named Dick Rosenthal, who was a counselor. Finally he told me he’d spent a year in Flint at the Mott intern program, which was an education/leadership program where they brought 20-25 doctoral candidates and 20-25 masters candidates to Flint,” said Carr. “Those people spent their year in the school system and worked towards their degrees. I applied and was awarded one of those fellowships and I spent the year renting a twobedroom house on Davison Rd. right near Dort Highway. Right by the old AC Sparkplug.”

That led to Carr taking a cue from the speakers that came before him, including Tyler White, a 15-year old who was diagnosed with Leukemia at age five but now plays high school hockey thanks to the treatment he received at Mott Children’s Hospital. A short video depicting the role Tiger’s third baseman Brandon Inge has played in the lives of several young patients at Mott was featured, as well.

“In 1965 I was a college student and one of my summer jobs was with a subcontractor who was putting in the reinforced steel that goes into the walls and the foundation. One of my jobs that summer was at Mott Children’s Hospital in Ann Arbor. What I’m telling you is, I built that hospital,” Carr joked. “I told that story one time and one of the guys that was following me said, ‘You know Lloyd, the reason they needed to build another hospital so soon is because you worked on it’.”

While Carr did fill the room with laughs and smiles despite his reputation for a stead-fast, straight-forward approach, that was simply his way of approaching the larger issues at hand.

“What I really want to talk to you about is why (this has) been such an exciting thing for me. In athletics, you read the paper and see there are a lot of negative things. There’s also a lot of criticism that, at times, is justified when we don’t do a good job representing those kids or the university,” said Carr. “I can tell you, the role of the athletic teams at Michigan, the players, the students, has been something I am so proud of because, how did we help? Well, when I was first asked to be part of the development plan and to coach here, the first thing we decided to do in football was have a car wash. We went out to the stadium and, for certain prices, the kids could play football with some of our players. You could also get autographs. This was the first time we ever had a development team, so everything was new.”

Carr then went on to explain how this event allowed the cause to get some state-wide attention, leading to other events like a radio station fundraising takeover.

“Then, we were able to encourage some great football players from Michigan, who were All Stars on that 1997 (national championship) team, like quarterback Brian Griese and Steve Hutchinson, an All-Pro in the NFL for six straight years with the Minnesota Vikings. (We also got) Charles Woodson, who’s gonna be in the Hallof Fame in the NFL I have no doubt. Those three guys came back to Michigan, got other former athletes to come back, and last summer we had our third golf outing,” Carr said. “That day we made a million dollars. (Also, last winter) when the Green Bay Packers came down to play the Detroit Lions, Charles Woodson announced he was making a $2 million donation for pediatric research at Mott Children’s Hospital.”

For the evening, more than $1,300 was raised in addition to the items up for auction, including a football autographed by Carr, Griese, Woodson and Hutchinson, that sold for $700. Details: www.med.umich.edu/mott.