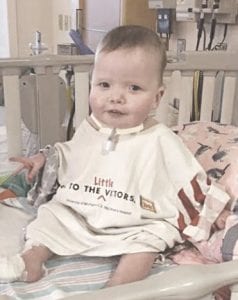 Twenty-one-month-old Emma Mae Withey was born with a condition known as tetralogy of Fallot, which causes holes in heart that affect blood flow and oxygen levels. Emma is undergoing her second open-heart surgery in Ann Arbor today. Photos provided by Angela Withey

GRAND BLANC TWP. — Twenty-one month-old Emma Mae Withey loves to dance, and after her open-heart surgery today, her parents hope she will be doing a lot more of that.

Emma was born with a condition called tetralogy of Fallot, a birth defect that created holes in the bottom of her heart, which affect blood flow and oxygen levels.

“We found out when I was 20 weeks pregnant,” said Emma’s mother, Angela Withey. “They did an anatomy scan and were able to see a small hole in her heart. They did a fetal echocardiogram while she was in my stomach, and we were able to get a cardiac team and everything set up when she was born.”

Emma was born April 23, 2018 and was five weeks premature. She had her first open-heart surgery when she was 2 months old. She had a difficult time recovering and spent seven months in the hospital. She had a tracheotomy and became dependent on a ventilator, which she continued to use after she came home last December. Eventually she was able to breathe on her own, but doctors have left the trach in place, which requires a lot of care. She also has a feeding tube in her stomach. 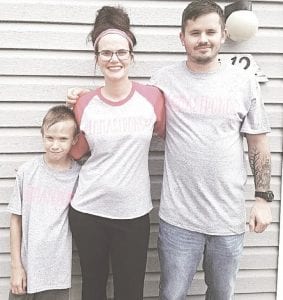 The second surgery, which will be performed by Dr. Jennifer Romano in Ann Arbor, will remove a shunt that has been helping to regulate Emma’s oxygen level, create a conduit that will connect everything in her heart and close a large hole.

“We’re really excited about the next steps after surgery,” Withey said. “We’re going to do a sleep study, then be able to take the trach out in April. Getting the trach out will help with the recovery process and with getting the feeding tube out. Hopefully, she’ll have more energy because her oxygen level will be up to normal.”

Right now Emma’s oxygen level is about 80, when it should be 99. But that hasn’t stopped her from learning to sit up on her own, scooting around the house and dancing.

“It’s taken a while, but she’s getting it now. She’s getting into more trouble, so that’s good,” Withey said. “She’s the happiest person you’ll ever meet. She’s always dancing and happy and smiling. She literally wakes up dancing. She’s full of life and really amazing. She can say ‘dada’ now, which is super exciting.”

Emma has a big brother, 9-year-old Tucker, and Withey said the hardest part of dealing with Emma’s health issues has been the time spent away from her son. He has spent a lot of time with his grandparents while Withey and her husband, Ron, have stayed at the hospital with Emma and cared for her at home.

“He’s handled it amazing,” Withey said. “I have to work at dividing up attention between him and her, so he doesn’t feel left out.”

Ron Withey has kept friends and family updated about Emma’s progress on Facebook. Her story caught the attention of Theresa Whiteside, who contacted the family about organizing a fundraiser to help with their expenses.

“Ron has good insurance, but people don’t think about the little things,” Whiteside said. “When you’re staying with your child at the hospital and can’t leave, the only place you can buy things like toothpaste or other necessities is the gift shop, and that gets expensive.”

The fundraiser was held Saturday at VFW 822, and Withey said the event raised about $3,000 She said she would like to use some of the money to help the other heart babies at their hospital – maybe provide each of them with a blanket with a note saying it’s from the Genesee County community.

The Witheys are preparing for another big life change. Ron Withey, a soldier with the Army National Guard infantry, leaves for training March 2. He’ll come home for a couple of days, then be deployed. Withey said that’s why the surgery is being done now, before he has to leave, but she has a good support system in place to help her while he’s gone.

“We’re really lucky because we found an amazing home nursing company,” Withey said. “We have two amazing nurses who come in and my mom to help with that. With those three ladies, we should be OK.”

After this surgery, Withey is hopeful Emma won’t need anymore big surgeries. She may need to have a conduit replacement when she’s in her 20s. There will be regular cardiology appointments, and she’ll have to take aspirin.

“She won’t be stuck in the house all the time like she is right now,” Withey said. “She’ll have to be careful, but overall she can have a good life.”