ODYSSEY OF THE MIND WORLD FINALS 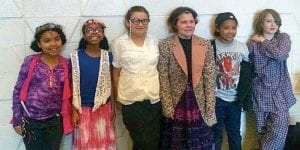 This Odyssey of the Mind team from Randels Elementary needs help raising funds to attend the World Finals in Lansing next month.

FLINT TWP. — A Go Fund Me page has been set up to help a team from Randels Elementary attend the Odyssey of the Mind World Finals May 20-23 at Michigan State University in East Lansing.

Odyssey of the Mind is an international creative problem solving competition challenging participants to find innovative solutions to a variety of technical and performance challenges.

Randels’ team of fourth and fifth grade students competed at the regional and state level to advance to the World Finals, said Christy Walker- Hackett, a team coach.

The students performed an interpretive skit that included making all of their own costumes, creating their own script, and designing a stage and background. Another part of the competition included spontaneous problem solving, where teams received an unknown scenario (problem) that required teamwork, creative thinking, and problem solving skills. In the end, the team scored second in their division at the state competition to win a qualifying position at the World Finals.

Making it to the World Finals presents a wonderful educational opportunity for the Randels students to interact with over 800 teams from around the world, said Walker- Hackett.

This will enable them to demonstrate great leadership skills, perform under pressure, work together as a group, and interact with and learn from teams worldwide. OM provides an enriching cultural exchange with teams from other regions and international students that will be traveling to Michigan from more than 20 other countries around the world to participate.

It has been over a decade since a team from Carman-Ainsworth Schools participated in the World Finals, Walker- Hackett said. To cover their expenses, they need to raise about $3,000 by April 24. Lodging and meals alone costs $532 per student. Other expenses include registration fees, a facility fee for security, competition space and opening and closing ceremonies space. Also they will share small gifts with other students and exchange regional pins, towels and headbands with them.

Pin trading is considered a great icebreaker that facilitates teams meeting and interacting with others students and forming lifelong friendships.

As of Tuesday, a Go Fund Me Page set up by Walker-Hackett has raised $360. Online donations of any amount are being accepted at www.gofundme.com/ qcfkr4

Other fundraisers planned include bake sales and pickle sales on April 15 and April 29 at Randels Elementary, 6022 Brobeck Street. Also, a spaghetti dinner on April 16, an adult spelling bee, a bottle drive, and a tetherball tournament are being organized. Candy and snack sales are planned April 11-12 and April 18-19 at the Kroger store at the corner of Corunna and Dye roads

Randels’ students have participated in Odyssey of the Mind since 1996, said Bonnie L. Haffajee, principal. Teams have gone to Worlds three times including Maryland in 2000 and Colorado in 2002.

“We are thrilled to have a team going to MSU this year,’’ she said’ “The students and coaches have worked so hard. I love Odyssey of the Mind because it challenges students to think out of the box. The organization provides the framework for the problem but the kids get to solve it in any way they choose. It is always go much fun to see what they come up with.”

Dr. C. Samuel Micklus, Professor Emeritus at Rowan University in New Jersey, created Odyssey of the Mind in 1978. Twenty-eight schools in New Jersey schools participated in the first creative problem-solving event. Micklus still develops all problems for the program, along with his son, Sammy.

Attending the World Finals event in Lansing is free and open to the public but tickets are required. They will be available at a ticket box office during the event.