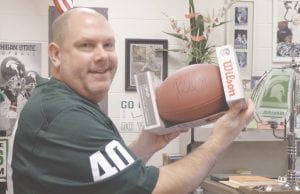 FLUSHING — Joseph John “Joe” Reinfelder, a beloved principal with Flushing Community Schools, passed away on Dec. 6 due to complications from a stroke.

Reinfelder, who was the principal at Seymour Elementary, was laid to rest last Wednesday. His funeral service was held at St. Paul Episcopal Church in Flint.

“Mr. R,” as Reinfelder was affectionately known at Seymour, was well-loved by his colleagues, staff and students. Previous to his tenure at FCS, he worked for Lake Fenton Schools as a teacher and principal.

Outside the classroom, Reinfelder enjoyed cooking, coaching t-ball and spending time with his kids.

Reinfelder was born on December 7, 1971 in Saginaw, the son of Fred and Nonnie (Wesolek) Reinfelder. He was a graduate of Michigan State University and was a Spartan fan through and through.

Tributes may be shared at www.sharpfuneralhomes.com.