Fury bounce back, snap losing skid on the road 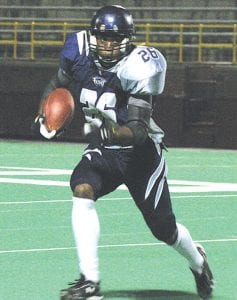 FLINT— After suffering their first loss of the season to the Capital City Stealth on June 23, the Flint Fury football team took to the road for a tough three-game stretch. The road trip began on June 30 in Cleveland, where the Fury would duke it out with the Midwest Rams. The defensive struggle went down to the end, with the Rams jumping on top early on a 35-yard fumble recovery for a touchdown. The Fury were able to draw even when Chance Garner hit Raymond Brown for a 55-yard score.

The contest remained a deadlock until the fourth quarter, when a costly fumble deep in Fury territory set the Rams up with great field position. Midwest took just three plays to reach the goal line, capping the drive on a 15-yard touchdown pass to the back of the end zone. With little time remaining, Garner heaved a hail Mary that would be intercepted and returned for the final score of the game, icing the Rams win, 19-7.

That two-game losing skid was snapped on July 14 in Dearborn, as the Fury stormed past a quality football team in the Detroit Diesels, 30- 14. The Flint running game contributed to the effort, producing touchdowns of eight yards from Shamonte Neal and three yards from Aaron Mangham. The aerial attack then kicked it into gear when Garner connected with Jamar Keener for a 30-yard score.

The special teams unit also chipped in for some points when Andre Broach took a punt return 55 yards to pay dirt. The Fury’s effort, however, came full circle with the production of the defense. Not only did Lonnie Johnson secure an interception, but Quinten Plair snagged two picks and Christopher Kotulski scooped up a fumble on his way to the end zone.

“It feels good to get that win again,” said Fury head coach Charles Lawler. “It really showed what we are capable of. We made a coaching change on offense. I took over playcalling duties for this game and the team seemed to respond well with four touchdowns this game.”

Flint currently stands at 5-2 overall and 4-2 in the Great Lakes Football League as it looks to make its first playoff appearance since 2004, when they competed in the now-defunct Ohio Valley Football League. The Fury will wrap up their three-game road stand on Saturday at the Motor City Soldiers.

Flint returns home to Atwood Stadium on July 28 against the West Michigan Force, who is highly regarded as the GLFL’s top squad and one of the nation’s elite. Following their return home, the Fury will conclude the regular season with two more home games against the Southern Michigan Timberwolves on August 4 and the Oakland County Playmakers on August 11. For more info, visit www.flintfuryfootball.com.