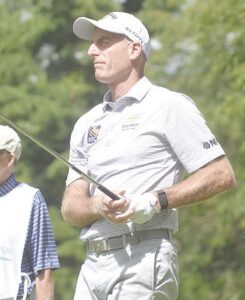 GRAND BLANC TWP. — Defending Ally Challenge champion Jim Furyk is looking forward to the return of spectators and a lively atmosphere at Warwick Hills this summer.

Furyk, who won last year’s Ally Challenge in his debut on the PGA Champions Tour, will headline a stacked field of competitors at the fourth edition of the Annual Ally Challenge presented by McLaren from Aug. 27 to 29.

Having played without fans at last year’s tournament, Furyk said that he’s excited to have people back in the stands and on the course for the Ally Challenge— particularly at Warwick Hills’ rowdy 17th hole.

“It’s a golf tournament that the community always comes out in droves to support,” he said. “They’re loud, fun and boisterous and they always make the event feel special because of the support they give.”

Over the years, Warwick Hills became one of Furyk’s favorite stops on the PGA Tour. In addition to capturing the 2003 Buick Open, he netted eight top 10 finishes in 14 events at the golf course.

“It’s a place where I’ve always been comfortable, and it definitely weighed in as a great place for me to start my Champions Tour career,” he said. “When I’m playing well, it suits my game.”

In the 2020 Ally Challenge, Furyk finished 14 under par and carded a bogey-free final round of 68 to win by two strokes over Goosen and Brett Quigley.

To win back-to-back titles, Furyk said that he’ll need to navigate some of Warwick Hills’ tighter fairways and duplicate the success he had with short irons and wedges last year.

“Putting the ball in the fairway and attacking the pins from 120 yards and in with a wedge is the kind of the strength of my game,” he said. “You get those opportunities (at Warwick Hills). If you put the ball in the fairway, you’re gonna have a bunch of short irons in your hand and opportunities to attack. That’s the bulk of my game and where I’ve done the most damage with my game on the PGA Tour.”

In just a year on the Champions Tour, Furyk has already won three tournaments, including the Ally Challenge, the PURE Insurance Championship and the 2021 U.S. Senior Open. He’s also currently second on the Charles Schwab Cup money list and has the most wins on tour this season dating back to 2020.

Altogether, Furyk tallied 17 wins on the PGA Tour and was the 2003 U.S Open Champion and the 2010 FedEx Cup Champion.