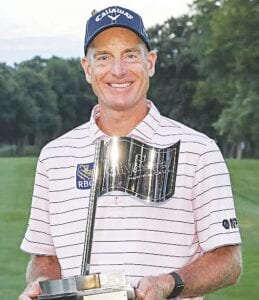 GRAND BLANC TWP. — Jim Furyk made the most of his PGA Champions Tour debut by winning the 3rd Annual Ally Challenge presented by McLaren at Warwick Hills.

Furyk, who won the 2003 Buick Open at Warwick Hills, finished 14 under par and carded a bogey-free final round of 68 on Sunday to win by two strokes over Retief Goosen and Brett Quigley. With the victory, Furyk became the 19th player to win his Champions Tour debut.

Furyk, a 17-time PGA Tour winner and 2003 U.S. Open champion, also broke a winless streak of five years, three months and 14 days and got his first victory since the RBC Heritage

Entering the final round one shot behind 36-hole leader Brett Quigley, Furyk birdied the 15th hole to take a one-shot lead and parred the last three holes to secure the win.

Quigley, who bogeyed Nos. 17 and 18, ended the final round tied with Retief Goosen for second place at 12 under par. 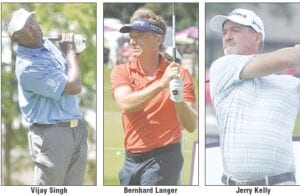 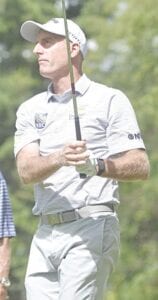 Jim Furyk on the tee at the 11th hole, Round 1. Photos by Ben Gagnon