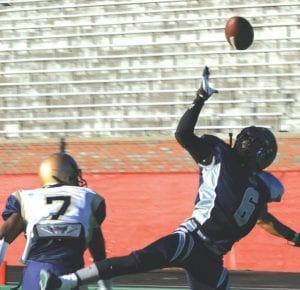 FLINT— Over the past few weeks, the Flint Fury seemed to be gaining their stride back. Capping off a three-game road trip with consecutive wins over the Detroit Diesels, 30-14, and the Motor City Soldiers, 40- 12, the Fury were firing on all cylinders.

Flint faced its biggest challenge of the season this past Saturday, returning home to play the West Michigan Force. The Force are the top-ranked team in the Great Lakes Football League and are regarded as one of the nation’s top semi-pro squads. The Fury fought and battled throughout the contest, but weren’t able to stifle the undefeated Force, falling in their first home game in a month, 41-22.

The Force drew first blood early on with a 30-yard field goal, and looked to score again after recovering a fumble. The Force were on the move when Flint’s Lonnie Johnson intercepted a tipped pass at the Fury seven yard line. Flint would eventually punt, and the Force ended the ensuing drive with a 8- yard touchdown run to extend the lead, 10-0.

The Fury showed a surge of energy on the very next play, as Mike Ivory returned the kickoff all the way to the West Michigan 25. The offense, however, would be forced to punt, then the Force got right back to work with a 19- yard scoring strike to grab a 17-point edge.

The Fury defense continued to force turnovers, as linebacker Ronald McCullough recovered a fumble at the Force 40, but the offense couldn’t capitalize. Flint picked up some momentum when Johnson hauled in his second interception of the game, returning it to the Fury 45 before being brought down. That interception, accompanied with a big pass interference call, set the Fury up near the West Michigan goal line.

Quarterback Chance Garner plunged through the line for a 1-yard touchdown, drawing Flint closer, 17-7. With just seconds remaining in the half, the Force wasted no time responding to the score. On the final play of the half, Force quarterback Aaron James heaved a 50-yard bomb that was hauled in for the touchdown, extending the West Michigan advantage, 24-7.

The Force got the ball back to start the half, but the Fury would be the first to light up the scoreboard in the second half. Following a three-and-out, Chrishaun Verdun fielded a punt before bobbing and weaving his way to a 75- yard touchdown. The Force, however, responded with a 2-yard scoring run and a 12-yard touchdown pass to cap off the third quarter, leading Flint, 38- 14.

West Michigan also added a 30-yard field goal to open the fourth quarter, which was answered by a 11-yard touchdown scamper from Fury ball carrier Aaron Mangham. Garner hit Adrien Lawler in the end zone for the two-point conversion. Defensive prowess and a late interception would seal the victory for West Michigan, 41- 22.

The Fury, now 6-3 overall and 5-3 in the GLFL, have just two games remaining before the post season arrives. Flint will host the always tough Southern Michigan Timberwolves at Atwood Stadium on Saturday at 7 p.m. before wrapping up the regular season at home on Aug. 11 against the Oakland County Playmakers. For ticket info, please visit www.flintfuryfootball.com.