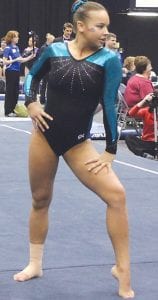 FLINT TWP. — She’s only a junior at Carman-Ainsworth High School, but Brittany Aragon, 16, has already landed the gymnastics prize she’s sought since age 4.

Brittany, a level 10 gymnast, qualified for national competition in 2009 and 2011. Last year, she ranked fourth overall at regionals to win a spot on the Region 5 national team that went on to win second place overall.

Despite that much ability, Brittany does not have Olympic aspirations.

She trains at Geddert’s Twistars Gymnastics Club in Lansing, which was named the No. 1 Women’s Gymnastics Club in the nation in 2009. Her coach John Geddert coached the 2011 World Team including Jordyn Wieber, the reigning World Gymnastics Champion and a favorite to win the gold medal at the Olympics 2012 summer games in London.

An honor roll student with a 3.8 grade-point average, Brittany loves her sport but wants to have a life outside of the full days of training necessary to become an elite level gymnast.

“I like school and I like coming here (to CAHS) and seeing all my friends,’’ Brittany said. “I don’t want to dedicate my whole life to gymnastics. I don’t want to miss out (on high school experiences).

A member of the National Honor Society and Health Occupations Students of America (HOSA), she is interested in a career in sports medicine.

With support from her parents Freddy and Lisa Aragon, Brittany trains four and a half hours a day five days a week, carpooling to Lansing after school. She also stays busy attending meets on weekends and training for competitions yearround including summers.

“We actually train more during the summer,’’ Brittany said.

The vault is Brittany’s favorite event and the one that most impressed the WMU coach, said her proud mom Lisa. That’s when the gymnast runs full tilt toward a stationary platform and uses both hands to catapult over it.

Brittany’s performances are posted on YouTube. Watching her graceful floor routine, it is hard to believe that her mother first enrolled her in gymnastics because she was clumsy.

“I was trying to improve her coordination,’’ said Lisa, who also enrolled Brittany in dance classes.

“She’s done really well. She’s got over 300 medals and 20 something trophies.”

With her mom, Brittany made unofficial visits to two other top-20 ranked gymnastics colleges, before deciding she wanted to become a WMU Bronco.

A couple of serious injuries threatened to sideline her ambitions but each time she bounced back faster than expected.

“She is very determined,’’ her mother said. “She does not take no for an answer or say I can’t, she says I’m gonna.”

Brittany is now training for the state meet in March.

“I just want to qualify for nationals again and have fun with it this year and not have to worry about colleges,’’ Brittany said of her current goals.

She won’t officially sign her WMU letter of intent until next year but for now she is happy knowing that her college education will be paid for. For her and her parents, that’s as good as gold.