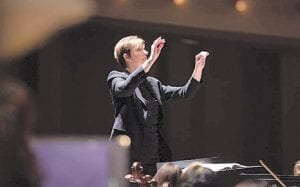 FLINT — She played viola and piano and worked on the stage crew for drama productions when she was younger.

Many productions and performances later, it’s an especially good day for Davin Pierson Torre when she sees the lightbulb go off in the head of a student who’s been practicing a piece of music and finally finds the right sound. She’s seen many of those moments in her more than 31 years as conductor of the Flint Youth Symphony Orchestra and nearly 25 years as director of the Flint School of Performing Arts at the Flint Institute of Music.

As a result, Torre is the only arts educator in Michigan – and one of only seven in the United States – to receive the National Guild for Community Arts Education’s esteemed Milestone Award. Torre accepted the award during the Guild’s Conference for Community Arts Education in Austin, Texas Oct. 31. She considers it to be more of a reflection on the Flint School of Performing Arts than on herself.

“FSPA is the largest community school of the arts in Michigan, and one of the nation’s largest. People probably don’t know we have more than 4,000 students,” explained Torre, who has been director of FSPA since 1995 and helped grow enrollment from 1,800 to where it is now. “I think it’s also worth noting that we’re located in Flint. It’s a very positive, enriching place in a community that has many good stories to tell. Ours is just one.

“The Flint Institute of Music – of which we’re a part – is a unique institution. It is one of few umbrella organizations where three performing arts programs operate together. Too often they’re in silos. Here, we’re equals, which means many opportunities for collaboration that benefit our students, staff, performers and the community in general. That’s why I’ve stayed here as long as I have.”

The Guild’s Milestone Award is designed to recognize Torre’s type of longevity. Recipients must have more than 20 years of demonstrated commitment to supporting and advancing community arts education. National Guild schools have students of all ages and skill levels, with tuition assistance. The goal is to break down barriers to arts studies. The Flint School of Performing Arts’ student body is made up of about 15 percent adults and senior citizens; 15 percent preschool and 70 percent K-12.

“In community arts education, people tend to stay in their jobs longer than other fields. Even new, younger directors are staying longer,” offers Torre. “It says something about the field. The study, the transformation; there’s always a challenge. You look at yourself and say ‘there’s so much more to accomplish, so many more kids who need to experience the travel or playing on stage at Carnegie Hall.’”

Under Torre’s leadership, FSPA has developed a reputation for excellence and participated in many national initiatives, most recently the Carnegie Hall Lullaby Project and American Ballet Theatre’s Project Plie. Last year, a comprehensive music therapy program was added to the school’s offerings. Accessibility is key to FSPA’s mission. More than two-thirds of the student body receives tuition assistance.

Torre maintains a busy conducting schedule and is in her 31st season as conductor of the Flint Youth Symphony Orchestra. The orchestra has made performance tours to France, Ireland, England, Scotland, Japan and New York City’s Carnegie Hall.

The Flint Institute of Music is a place where lives are truly transformed through the power of the arts. Programs include the Flint Symphony Orchestra, Flint School of Performing Arts and the Flint Repertory Theatre. Founded in 1971, FIM serves the greater Genesee County area and beyond. For more information, visit www.thefim.org. — G.G.