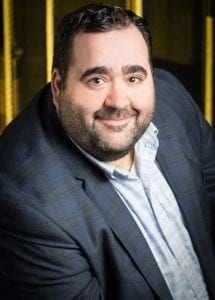 Michael Lluberes, who has been named as the new Producing Artistic Director for Flint Youth Theatre, is an award-winning playwright and actor. He says that he is excited to begin his new position, and will kick off the summer directing a two-man Scottish adaptation of Robin Hood.

“I was in New York for sixteen years, so this is something of a homecoming for me,” said Lluberes. “This wonderful opportunity brought me back. I’ve been a playwright and an actor and director, and I was really looking for something that brought all those things together, and this seemed like the perfect fit.”

Lluberes, a graduate of University of North Carolina School of the Arts, as well as a member of The Acting Company, Lincoln Center Theater Directors Lab and The Dramatists Guild, has won numerous awards for his work, including the ASCAP Foundation Harold Adamson Award, The American Harmony Prize, and NEA New Artist Initiative Award.

His work includes The Boy in the Bathroom (New York Musical Theatre Festival, New York Musical Festival Best New Musical and Best Book Awards, Chance Theater, Bloomington Playwrights Project: Adirondack Theatre Festival); Peter Pan: The Boy Who Hated Mothers (BroadwayWorld L.A. Theatre Award Best Play, The Blank Theatre, No Rules Theatre Company, Kennedy Center Page-to-Stage Festival); and The Geranium on the Windowsill Just Died But Teacher You Went Right On (ASCAP/Dreamworks Workshop), among many more. As an actor, Lluberes appeared in the U.S. Premiere National Tour of Dirty Dancing, Off-Broadway in Heaven Knows, American Dreams: Lost and Found, The Taming of the Shrew, and on TV in “Chappelle’s Show,” as well as others.

Lluberes says that the Flint Youth Theatre is a “cultural jewel” in Flint, and that he hopes to help bring awareness to the theatre by creating new work for Flint and the surrounding area to enjoy.

“I am beyond thrilled to begin this new adventure as Producing Artistic Director of Flint Youth Theatre,” said Lluberes. “As Michigan’s premiere professional theatre for young audiences, FYT has such a wonderful reputation in the community and I hope to share that with the rest of the country. My goal for the theatre is to transform it into a hub for creating world premiere plays and musicals and bold new takes on theatrical classics. I am eager to build on FYT’s enormous success in the past and grow it to be one of the most exciting, diverse and innovative theatres for young people in the nation.”

Since 1957, Flint Youth Theatre’s nationally-acclaimed, award-winning intergenerational programming has provided Flint area residents with opportunities to experience the unique joys of discovery and self-expression through the performing arts. A program of the Flint Institute of Music, FYT is the resident theatre company at the Flint Cultural Center. For more information about Flint Youth please visit www.TheFYT.org.

To learn more about Lluberes, please visit his website at www.MichaelLluberes.com.