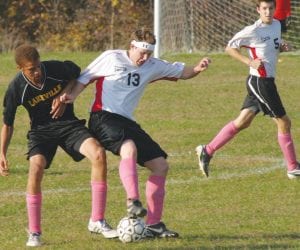 LakeVille moved on to face Goodrich yesterday after beating Dryden in double overtime.

DRYDEN
— The Genesee Area Conference soccer tournament entered the semifinal stage Wednesday, with defending champion Goodrich still in the running for another title.

The Martians drew a first-round bye for Monday’s games by virtue of their first-place finish in the league standings at 6-0. They took on Birch Run in a nonleague game and won, 1-0, to extend their overall record to 10-6-1.

Goodrich faced LakeVille in a semifinal at home. The Falcons had squeaked past Dryden, 2-1, in doubleovertime in Monday’s first round.

The other semifinal bracket had Lake Fenton playing at Durand. Lake Fenton reached that game by beating Montrose, 7-0, in Monday’s first round. Durand mercied Mt. Morris, 8- 0, with a five-goal second half. Durand finished second to Goodrich in the league standings at 4-1-1 and took a 13-4-1 overall record into Wednesday’s game.

The semifinal winners are scheduled to meet at 4:30 p.m. Friday at the home of the highest-seeded team. The semifinal losers will meet at the same time at the highest seed’s home.

The losers’ bracket had Dryden visiting nonleague foe Swartz Creek on Wednesday, while Mt. Morris visited Montrose. The Mt. Morris-Montrose winner will play Dryden on Friday, while the loser goes to Brandon for a nonleague game.