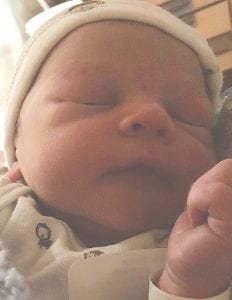 GAINES TOWNSHIP – When Braxton Michael Jay Yelinek made his debut into the world at 12:12 a.m. Monday, Jan. 1, he earned instant celebrity status as the first baby of 2018 born at McLaren Flint.

Braxton, the son of Matt and Breanna Yelinek of Gaines Township, tipped the scales at 7 pounds, 8 ounces and measured 20 ¼ inches from head to toe.

Matt was deployed to Afghanistan in September, and wasn’t sure whether he’d make it back in time for his son’s birth.

“They let him come home early because of the baby,” said Breanna, “but it took a while. He got stuck in Kuwait for a couple of days, but he made it back Dec. 22.

“Matt was super excited to be here and I am very glad he got to come back. He’s very proud.” 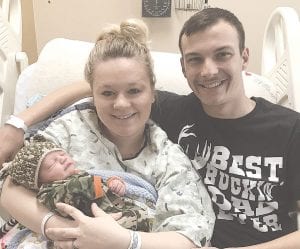 Matt is scheduled to return Jan. 10 to his home base at Fort Drum in northeast New York, about 30 miles from the Canadian border and a short drive to the eastern shore of Lake Ontario. Breanna said she and the baby will join Matt at Fort Drum if he isn’t deployed back to Afghanistan in February.

“I had a pretty smooth pregnancy, but the last three months were kind of hard because my husband wasn’t here,” said Breanna. “But we talked on the phone, and I had all of my family and his family, so I got through it.”

Braxton, who was due Dec. 30, was delivered by Dr. Jason McMaster.

Breanna said McMaster twice attempted to induce labor, but Braxton wasn’t having it.

After more than two days in the hospital, and a full day of labor, Braxton finally arrived, and he seems to be taking his celebrity status in stride.

The Yelineks knew in advance that they were having a son, but they were surprised to learn that they had the first New Year’s baby.

“I couldn’t believe it,” Breanna said.