Gaines Twp. man rallies to the aid of Texans devastated by winter storm 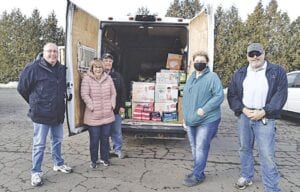 GAINES TWP. — Swartz Creek-area native Rick Strauss developed a lot of friendships in the 42 years he lived in Texas. So, when he heard about the devastating consequences of February’s winter storm, he knew that thoughts and prayers were not a sufficient reaction.

Friday, March 5, the 64-year-old Gaines Township resident hit the road bright and early for the 27-hour drive to Houston. He was behind the wheel of a large van packed with water and diapers.

“I’ve been through several hurricanes, and a couple of freezes, but this one here lasted so many days,” he said. “All their pipes, the older ones are galvanized and PVC, which do not hold up to a freeze. I have several friends whose houses were flooded, just devastated.”

Strauss began contacting friends, learning more about the situation, and finding out about the needs of the affected residents.

Although, in the past week or so, the national news has focused more on Texas Gov. Greg Abbott lifting the mask mandate, the effects of the cold snap remain, and the residents continue to suffer.

“There’s just all kinds of devastation in all areas,” Strauss said. “The poverty-stricken areas don’t have food or water. There are still hundreds of plumbers coming in from out of state to help out. It’s not back to normal, yet. I had to do something. I was compelled to help out.”

Strauss’ brother, Mike, rallied his friends at American Legion Post 294 in Clayton Township. Mike Strauss serves as 1st Vice Commander of the Sons of the American Legion. All three legion branches – the legion, the auxiliary and the Sons – agreed to pitch in with $100 donations each. Another $500 came in through a gofundme account.

“The legion was very helpful in their donations,” Strauss said.

The monetary contributions were sufficient to purchase about 340 gallons of water and 14 boxes of diapers, each containing more than 200 diapers, and baby wipes. Strauss would have taken more, but the weight of the water – about 2,400 pounds – was all the payload Strauss’ van could accommodate.

“A couple weeks ago, I was watching TV and saw group out of New York that rented a van and did the same thing,” Strauss explained. “It just weighed on me. I kept thinking, ‘I own a van. I lived there 42 years. Why can’t I do something?’”