Gaines Twp. police turn in badges; agency in holding pattern ahead of May election 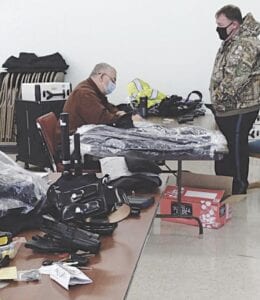 Gaines Township Police Chief Mark Schmitzer records the equipment that the township officers turned in April 1. Voters will decide in May whether to continue to fund the department or continue the process of shutting it down. Photo by Lania Rocha

GAINES TWP. — The process of shutting down the Gaines Township Police Department began April 1 when the agency’s officers turned in their uniforms and gear.

May 4, voters will determine whether the township continues the dissolution or begins to rebuild the department when they cast their ballots for or against a 0.89-mil, five-year levy that will generate about $179,000 in the first year. The millage would cost the owner of a $100,000 home $44.50 annually, or $3.71 monthly.

Police Chief Mark Schmitzer, who accepted a position as chief of the Corunna Police Department in November, remains on staff part-time to keep the department on lifesupport and wrap up the final details. The secretary also remains on staff to assist.

“If the millage passes, we will bring the officers back and a new chief will be sought,” said Schmitzer. “If it fails, I’ll assist the township in shutting down the department.”

“We had a guy in here yesterday who had two trailers stolen from his yard,” she said. “One had a lawn mower in it, the other had a lot of expensive tools. We’re not taking any more new cases, so we had to pass it on to the state police.”

Schmitzer said that, although the troopers and deputies are a “great bunch” of men and women, they don’t know the township like the local force does.

Township police response times average between five and eight minutes, he added. Other agencies can take up to 30 minutes to arrive, which can make a difference in critical incidents, he said.

The township launched its own police department in 2000, and the agency remained a one-man force through 2013. At that time, voters approved a half-mil levy that helped pay for a part-time officer.

“It allowed the township to allocated resources to first and second shift,” said Schmitzer, who took the helm of the department in 2011.

In part, the officer focused on stopping the rash of day-time break-ins, Schmitzer said. Nighttime patrols concentrated on traffic and, more specifically, reducing the number of serious crashes, he said. There were also a rising number of assault cases being reported.

“We got so busy with more serious cases coming in, so we brought in a part-time investigator,” the chief said. “We brought (the break-ins and assaults) down.”

Schmitzer said the township has “a fair amount” of residents who are anti-police. Many of those people have found themselves on the wrong side of the law, he said.