Gaither Homecoming artist coming to Central Church of the Nazarene 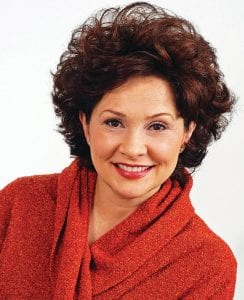 Central Church of the Nazarene. A native Parksville, Kentucky, Speer was first introduced to Christian music at a concert of The Imperials. Watching Russ Taff perform ignited her passion for music and she soon was performing alongside Taff and as a regular on the Gaither Homecoming videos and tours.

“It’s so surreal to perform next to Russ; he and The Imperials are the reason I fell in love with Christian music in my teens. That means that Russ is a considerable number of years older than me, a fact I continually remind him of,” she wrote on her website, www.allisondurhamspeer.com.

Since then, Speer has performed in churches across the United States, including First Baptist Atlanta, The Brooklyn Tabernacle and First Baptist Orlando. She has performed on many Bible study cruises with Charles Stanley and D. James Kennedy, in addition to performing with evangelists Luis Palau, Bailey

Smith, David Ring and Johnny Hunt of First Baptist Church of Woodstock, Georgia. Her appearances on the Gaither

Homecoming videos, The 700 Club and The Trinity Broadcasting Network have left the nation wanting more of Speer.

Speer has been the guest soloist at the national Southern Baptist Convention, the Nazarene General Assembly and numerous Praise Gatherings and Family Fest Events hosted by Bill Gaither. Her time has been spent touring with the Gaither Vocal Band and Gaither Trio, and with Mark Lowry and Wayne Watson, as well as keeping a hectic schedule of solo appearances.

Her latest recording, “This Old House,” showcases the depths of her musical abilities and her passion for showcasing the Gospel with poetry. The album is packed with scripture and Bible stories. “It is the best opportunity I’ve had to ‘re-present’ the Gospel,” she wrote.

In addition to music, Speer has made several humanitarian trips to Russia, Bosnia, the Philippines and South Africa.