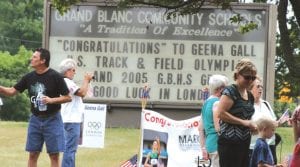 Grand Blanc residents gather around the high school marquee to congratulate Geena Gall, now in London, England prepping for her first Olympic race in the 800.

LONDON, ENGLAND — Nearly a dozen Michigan athletes will represent the United States when the 2012 Summer Games kicks off Friday, July 27, in London, England. Grand Blanc and U-M grad Geena Gall is perhaps one of the best-known locals and she’ll be vying for a medal in the women’s 800 race when the track and field events take center stage during week two.

In an exclusive Skype interview with View Newspapers from London last Thursday, Gall talked about making the Olympic Team after narrowly missing in 2008. The Eugene, Ore. resident has been training as a member of the Oregon Track Club Elite under coach Mark Rowland since 2009. Gall has been in London since Monday, July 16, training and living outside the Olympic Village in a nearby suburb.

“I ended up in Eugene in 2009 when I came to Oregon after my fiance’, Jason Lara, transferred to Oregon,” Gall said. “We met at UM when he was wrestling and I was running track.”

Though she’ll be experiencing her first Olympics alone, the hometown crowd back in Grand Blanc and Genesee County will be glued to TV sets watching their favorite girl contend to make the podium. That show of support took place Sunday in front of the high school as Gall’s parents, June and Jerry, family, former coaches, former teammates and fans gathered around the school’s marquees that congratulate and send out best wishes to Geena. It’s hard to keep that surprise with social media, so Gall was well aware and honored.

“It’s been a dream of mine to go to the Olympics since I saw the Olympics on TV,” Gall explained. “It’s an amazing opportunity to represent your country and it was a huge, huge relief to make the team. I’m very happy all my hard work paid off. It’s been an up and down path for me the past three years. I’m just excited to race and experience the whole Olympic thing.”

One benefit that could favor Gall is the predicted damp and cool weather, something that befell lots of competitors at the Olympic Trials in Eugene.

“Bring it,” Gall said of the predicted weather. “I’m used to the rain and the cloudiness. The trials were bizarre, because in June the rain usually stops. It really made some girls not so happy to be competing. I’m ready!”

Because she isn’t slated to run until Aug. 8, Gall has plenty of time to enjoy the opening ceremonies and athletes’ parade, which she said she was warned could take up to five hours, and lots of other events leading up to race day.

“We’re all excited to get to the athletes village and being around other athletes,” Gall said. “I am participating in the opening ceremonies, but I don’t race until Aug. 8. I’m just so proud to be wearing the USA uniform and being in the stadium. I’m trying to get tickets to see other events and want to see wrestling for sure, and would love to see gymnastics and probably diving.”

Gall raised money through Tshirt sales to hopefully bring some family to London, but she noted the housing is just a nightmare and that part of the trip just couldn’t be worked out.

“Several of my teammates have been to the Olympics before, and they are just telling all of us to just enjoy being around our teammates who have been before, just telling me to stay true to yourself, enjoy the moment, but stay focused on the job at hand.”

That likely won’t be a problem for the multi-time All-American, who first began running at the tender age of six, looking to follow in the footsteps of big brother, Reggie.

“I actually started running because of my older brother, Reggie,” Gall explained. “He was big in recreational track and field and the Hershey’s Track meets for young kids. I first started at a local track meet at Grand Blanc at age six. I also golf, play tennis tennis, soccer, and basketball. My family is all very athletic.”

Another role model for Gall has been Nick Simons, who also runs the 800.

“He’s just always so calm, poised, confident,” Gall said. “He won the US National title the past five years and continues to get better and is always ready. I take a lot from him, as far as international competition.”

That international competition includes Pamela Jelimo of Kenya, who won in the 2008 Summer Games, Caster Semenya of South Africa, who went through a big controversy regarding her gender when she tested positive for too much testosterone in 2008, and Alysia Montano and Alice Schmidt, who joined Gall as the finalists to make the 800 at the Olympic trials.

“I’m excited to toe the line with all of them,” Gall said. “The weather could be on my side, but I know I’ll have to run a personal record in the semis to move on. My best time is 1:59.24 and I’ll have to run at least that in the first round and know I can.”

Regardless of how she finishes in her race, Gall said running would still be part of her life.

“Next year the Worlds are in Moscow, so for now, I’m just happy to be here, will just enjoy the moment, live it up and relax,” Gall said. “This is a blessing for me and I don’t know if I’ll make the next Olympics, so I just feel really honored to be part of the 2012 team.”

On Sunday, the city of Grand Blanc gathered to celebrate Gall’s accomplishments and to wish her well in competition.

“We were absolutely thrilled and honored that so many friends and family came out to show their support for Geena and for us,” said Gall’s parents, June and Jerry. “I know this is prime time for family vacations in our state but even so, we couldn’t have been happier with the turnout. We were especially proud to see so many of our Rhoda Street neighbors show up, and we just had the time of our lives meeting and greeting everyone.”

Gall isn’t the lone Michigan representative or those with old ties to Michigan, however, the star-studded list includes:

* Serena and Venus Williams, grew up in Saginaw, reside in Florida, women’s tennis

** A dozen or so who live outside the country, include Frank Gomez, who wrestled for MSU.

Other Olympic hopefuls not qualifying:

* Courtney Weaver, Davison, swimming, made semis of 200 at the trials, finished in top 16 and as 18-and-under made the USA Pan Pacific team, heads to Honolulu, Aug. 23