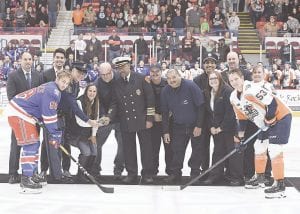 The Flint Firebirds game ticket also included admission to the Battle of the Badges game. This was the third annual battle between local area police and firefighters, with the police coming away with their second win! Dort Federal Credit Union provided the tickets to the game for the first responders.

Wellwood scored five goals and added five helpers in 31 NHL games with the Philadelphia Flyers between 2010-2013. He’s also won the Canadian Hockey League’s Memorial Cup on three separate occasions. He won it twice as a player with the Windsor Spitfires in 2009 and 2010 and once as a coach in 2015 with the Oshawa Generals.

“We could not be happier to welcome Eric Wellwood back to the Firebirds,” said Flint Firebirds Vice President of Hockey Operations and General Manager Barclay Branch. “Eric will bring a very strong pedigree to Flint, having won championships both as a player and a coach. He is a teacher and student of the game.”

On the ice this past weekend, the Flint Firebirds’ game Sunday was a slight change of pace. The Firebirds held a lead heading into the final period, but couldn’t hold on, falling to the Barrie Colts, 6-4, at the Dort Federal Event Center.

Kyle Harris put Flint on the board early with a power-play goal, but the Colts tacked one on late in the opening period to draw even. Jake Durham regained the lead for the Firebirds in the middle stanza, which again was answered with a Barrie goal less than a minute later.

Ty Dellandrea’s goal midway through the frame gave the Firebirds a 3-2 advantage as they entered the second intermission. That’s when things went completely haywire, when Barrie buried four goals in a 15-minute span to pull away. Jacob Winterton added a cosmetic goal as time expired.

Saturday’s game at the Saginaw Spirit went completely wrong for Flint in a 6-0 loss. Saginaw quickly pulled away, taking a 4-0 lead after just one period. They added insurance markers in the second and third period, as well.