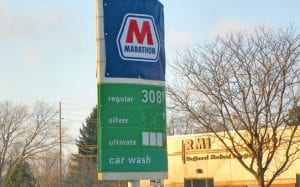 This BP station is switching to Marathon.

FLINT TWP. — Patrons of BP gas will have to travel a bit further off I-75 to buy fuel after a brand switch by the longtime BP gas station at the corner of Miller and Lennon roads, commonly called The Point.

The station at 3356 Miller Road, has been converted to the Marathon brand.

For many years — at least 17 — the station has worn the bright green and yellow BP sunburst colors and before that the red, white and blue Amoco torch and shield.

British Petroleum (BP) merged with AMOCO in 1998 and circa 2000 began converting all stations to the BP brand image.

The station manager at Miller and Linden said the switch was made about two weeks ago to become more competitive. Nothing changed besides the name, he said.

Competition for the station likely notched up last spring with the opening of a budget-priced Admiral gas station, at 3265 Miller Road, just down the road. A Speedway, just off the freeway exit, is another nearby budget gas competitor.

The nearest BP station now likely is one at 5120 Corunna Road between Linden and Dye roads, also accessible from the I- 75 and Corunna Road exit.

Marathon supplies fuel to more than 5,000 retail outlets nationwide, according to its website.