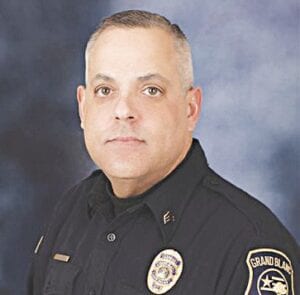 GRAND BLANC — After more than 37 years on the force, Grand Blanc Police Sgt. Marcus Rossie is hanging up his badge.

“He wore just about every hat in the department at one point or another since his career began on June 1, 1983,” said Lt. Chris Rhind.

“He is known and respected by many people in this community,” Rhind said. “His knowledge and experience of the community and the people in it will be sorely missed.”

Rossie, a Grand Blanc native, spent his entire career with the Grand Blanc Police Department, save for about two months when he worked as a paramedic for Ingham County.

“I wanted to be a paramedic,” Rossie said. “I went to Ingham County to do that, but we didn’t run any medic calls, so I came back to Grand Blanc.”

After high school, Rossie attended the paramedic program at Mott Community College, with the ultimate goal of continuing his education to become a doctor.

“However, once I became a police officer, it just felt right,” he said.

His favorite part of police work was interacting with the people.

“Lately … you see on the news, people protesting,” he said. “I’ve found that people are pulling up and saying, ‘thank you,” and they’re very appreciative of us. That’s what I really like.”

Now, Rossie said, he will spend his time doing anything he wants to do. He enjoys fly fishing, and he plans to take up metal detecting.

“A couple years ago, I saw some guys doing it and I’d watch them find some interesting things,” he said.

Rossie and his wife, Michelle, who works as a physician’s assistant at Ascension Genesys, plan to stay in Grand Blanc where they enjoy spending time with their daughters, Nisha and Manideepa, grandchildren Sophia and Elijah Newell, and other family members who lives nearby.