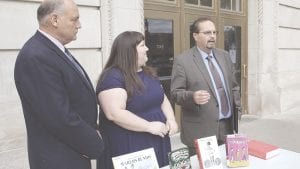 GENESEE COUNTY — For many kids and young adults, the series of illustrated children’s novels called Captain Underpants are books they find amusing, filled with characters many of them can connect with.

But according to the American Library Association, the Captain Underpants series was explicitly banned in some schools for insensitivity and being unsuited to the age group, as well as encouraging children to disobey authority.

The book is one of the top five books banned in some place in 2018, according to David Conklin, director of the Genesee District Library.

Conklin, and GDL librarian Liz Kish, displayed the five most banned books from 2018 on the steps to the Genesee County Circuit Courthouse, Sept. 27, with County Clerk John Gleason, to bring awareness to Banned Books Week.

The books included Captain Underpants, the novel George, the children’s book A Day in the Life of Marlon Bundo, The Hate U Give and Drama.

Conklin said Banned Books Week started in the 1980s as a way for the library community to demonstrate how it protects the freedoms of citizens.

“On the table in front of us are the top five books that were challenged or banned in 2018,” said Conklin. “We don’t do a lot of that (banning) in the Genesee District Library, we maybe get one or two (challenges) a year. This year we had none challenged, last year none were challenged and before that maybe one or two.”

Conklin said there is a form to fill out, but the GDL looks at books as being about an individual’s choice about the kind of books they like. Libraries, he said, are pioneers of freedom of speech and freedom of expression.

Gleason said the reason the press conference was held on the steps of the courthouse is that is the typical course of a banned book.

“Typically there are lawsuits engaged,” said Gleason. “With the banning of book you are literally banning a thought. So, in the end, its really is a divisive issue.”

Gleason cited books that were banned in the past, like Catcher in the Rye, Catch-22 on the Adventures of Huckleberry Finn by Mark Twain.

Twain, he said, was considered the father of folklore in America, but his books were still banned. Sometimes they were banned for particular language, often because of terms used to describe Jim, who was a slave.

“In the end you would see it was an anti-slavery novel,” said Gleason “(Twain) was anti-slavery and he was a great communicator for social justice. Those who led the issue to ban those books likely had some misgivings about ending slavery.”

He said banning of books, in his opinion, makes it impossible for there to be social change because by restricting access to books the issues they bring up cannot be brought into the public eye and addressed.

“These banned books – I don’t think it had to do with the language, it had to do with the subliminal message,” said Gleason “That’s why important to stand up for these authors. Not only books, but any cultural discipline. We’ve got to unban the ban to make all publications accessible to the public.”

All five books on the banned list from 2018 are available at the Genesee District Library.