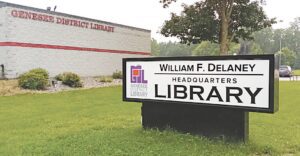 The sign outside the Genesee District Library headquarters in Flint is a reminder of former Grand Blanc Township Supervisor William F. Delaney’s contributions to the county library system. Photos by Lania Rocha

FLINT — William F. Delaney’s legacy lives on in many ways, and as a testament to his service to the Genesee County community, the Genesee District Library officially dedicated the headquarters building in his honor.

“This humbles both Bill and I,” said Delaney’s widow, Mary Delaney. “I know he is grateful.”

GDL Director David Conklin said Delaney’s dedication and vision not only saved the library but shaped it into the network of branch libraries serving 19 communities that it is today.

When, in 1978, county officials announced that they intended to pull the funding for the county library system, Delaney worked with township supervisors to create a plan that would save the system through a countywide levy.

“We are so grateful that Bill and other members of the community like him had the will to fight for libraries,” Conklin said. 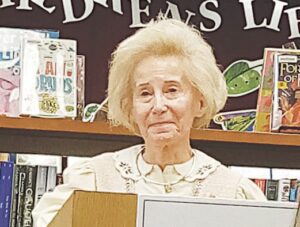 Mary Delaney thanks the Genesee District Library board for honoring her late husband, former Grand Blanc Township Supervisor William F. Delaney, by naming the library headquarters after him.

Crites said he believes Delaney would be “very, very happy” to have the headquarters named in his honor.

Saying that life is a story, Ytterock noted that “Libraries are filled with signs, information and stories with which we might locate ourselves.”

He added that the stories contained within the libraries’ walls let us know we are not alone, and we are not so different from others.

“Bill Delaney understood the connection between story and identity – it helps us understand our connection to one another,” Ytterock said. “The Genesee District Library is a pathway to uniting people, … linking them to one another to show we’re not alone, our stories intersect.”

Stiverson said the dedication of the headquarters building to Delaney’s memory is “tangible proof … he was able to contribute to this world and make it a better place.”

“There are not enough words in all your libraries combined to express how grateful we are,” he said.

Delaney served on the Genesee District Library Board of Trustees from 2011 to 2019, the last six years as chairman.