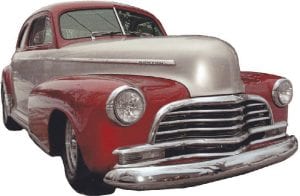 BURTON — Karen Borton had just three stipulations on an 18 state, auto show-seeking road trip she took five years ago with her then 10-year-old granddaughter: a pool at every hotel they stayed in, ice cream every day and a stop at every mall they happened across.

“It was a girly trip but we hit every car show we could find,” Borton remembers.

Road trips and car shows have been a way of life for Borton since her and her husband’s retirement from General Motors in 1994.

“After we retired, we decided to rebuild hot rods,” Borton said.

And that’s what happened. Antique gas pumps and rod signs marked the driveway to the Borton home.

A 1938 black Ford Coupe, 1947 toreador red Chevrolet Sedan and a 1948 purple five window pickup all rolled out of a massive garage that the Bortons erected for the rebuilding.

Borton’s current prized car is dubbed “The Borton,” a 1946 Chevrolet Coupe that was a birthday present from Brady, her late husband.

“That car and I were born two weeks apart,” Borton said.

Borton and her husband set to work on the car, keeping only the shell and the original back seat.

Intensive work on the coupe had just begun when Brady — a man who took each of his three sons to the junkyard on their 15th birthdays for their first “ride,” who kept a never-ending supply of Labatt Blue and venison sausage in the garage fridge and who kept his tools diligently organized — died unexpectedly in 2003.

“He died not very far into the car,” Borton said. “So it became mine.”

After that, the rebuilding of “The Borton” became distinctly more female.

Matching chrome parts were used to assemble the engine. Fingernail polish was color tested on the drip pan to mimic a glittery automobile paint.

When Borton finally settled on her custom colors, she got to name them. “Copperly Metallic” and “Iridescent Champagne” adorn the cinnamon and silver-colored car in four base coats and seven clear coats.

Although Borton is a self-described “gearhead” who never worries about breaking down on the side of the road, she enlisted the help of her friend Ron Box, who lives in London, Canada, to help finish the coupe.

“The Borton” was transported in pieces to and from Michigan and Canada.

Borton herself made the trip to London four or five times per week to supervise the building of the car.

Some improvisation, like a farmer’s shovel head being welded into the coupe’s firewall to make room for the engine, was used during the rebuild.

When completed, the car was driven back to Michigan. And it’s been driven ever since to car shows from Maine to Florida.

In fact, Borton discourages drivers of classic cars to trailer them en route to car shows. As the chairman of the Back to the Bricks Michigan Mitten Promo Tour, she says she’s working on “promoting everyone to drive their own cars this year.”

“Even if it’s a grocery getter,” she adds, smiling.

The promo tour in June will canvas the entire state, starting in Flint and stopping in Port Huron, Bay City, the thumb area, Alpena, Mackinaw, Traverse City, Ludington, Holland and Brooklyn. On the return to Flint, the tour culminates with the Sloan Museum Auto Fest.

Additionally, the Baker College Transportation Center is displaying Borton’s 1969 Skylark, decked out in a breast cancer awareness vinyl decal. Borton is a three time survivor of breast cancer and the director of the Flint-based Breast Cancer Awareness for Life.

In her spare time, Borton recently chalked up a first place win in the custom rod ’35 to ’48 category at Detroit’s Autorama in February.

“It [The Borton] hasn’t been to a show yet where it hasn’t placed,” she said.

While at Autorama, Borton was also invited to lecture. Her speech addressed women entering the maledominated field of car shows.

“So many women don’t know what is going on the garage,” she said. “That’s not the way it should be.”

At Cobo Hall, Borton invited countless children to come sit behind the wheel of “The Borton.” And one day, Borton’s youngest grandchild, currently two and a half year old Chloe, will stand to inherit “The Borton.”