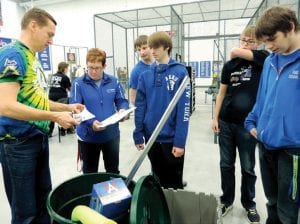 A pool noodle, recycling can and storage bins are among the supplies needed for the 2015 FIRST Robotics challenge. Big Mo, the CAHS team, met at the FRC kickoff Saturday to get their kit and, like their peers, gathered in a separate classroom to begin strategizing their robot build.

FLINT TWP. — “Recycle Rush,” the robotics challenge for the FIRST Robotics Competition (FRC) 2015 competition season started Saturday with an internationally-televised live broadcast by NASA TV and opportunity for high school teams to meet at “local” kickoffs to learn the rules, pick up the Kit of Parts, and begin the design and build portion of the competition.

Megatron Oracles, aka BIG MO, the Carman-Ainsworth High School team were among area teams participating in a district kickoff at Kettering University on Saturday.

Building the robot according to the instructions and materials supplied is the next step in the competition. All teams received the same kit but each devises their own strategy for how to use it to build and program the robot, said Ellen Crain, the C-A team coach and mentor.

The students have about six weeks (until mid-February) to design and build the robot, she said. At that time, the completed robot will be bagged and tagged and can no longer be used until actual competition begins.

“Recycle Rush” this year’s challenge, requires designing a robot that will be remotely controlled to clean up a “liter” field made up of hard-sided crates, a trash can with a hole in the lid and a foam pool noodle. Extra points can be scored by placing the noodle in the slotted lid – sort of like inserting a straw in a cup. Points will be lost if debris is left on the field at the end of play.

Crain said her team would immediately begin meeting four or more nights a week to work on their robot. She has 23 students this season.

Similar to other school competitive sports, the FIRST Robotics Competition (FRC) has become a varsity sport of the mind designed to help high-schoolaged youth explore careers in Science, Technology, Engineering and Math (STEM). Like other team sports, FRC has coaches, a field of play, strategies, playoffs and even a Super Bowl-like finale with trophies. But in this case, the players are robots masterminded by human competitors.

Michigan’s FRC program is divided into sixteen districts. Modeled after high school varsity sports programs, each Michigan FRC team participates in two qualifying tournaments, called district events. Following the district events, the teams are ranked and the top 64 move on to a State Championship. In 2014, the top 32 teams from the State Championship qualified for the FRC World Championships held in St. Louis in April.

Carman-Ainsworth’s Megatron Oracles, FRC Team 314, was founded in 1999 after winning a grant from its first partner, Delphi Automotive.

In its first year, the team was a finalist at the Philadelphia Regional Event, a finalist at the Great Lakes Regional Event, and a semi-finalist at the Chief Delphi Invitational Event. In an alliance with two other teams, they won the 2014 Michigan FIRST Robotics Competition State Championship. C-A’s overall qualifying rank was16th out of 64 teams in the state championship event. Big Mo was ranked 6th out of 277 teams that played in the State of Michigan with a grand total of 272 points earned in the 2014 competition season.

Winning takes talent, time and money. Crain said she gets an annual $60,000 budget but expenses including materials, food, travel and lodging require much more than that. She welcomes all support — material and monetary.