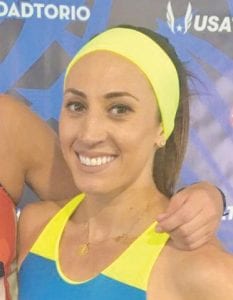 All inductees will be honored at the 40th annual induction ceremony that takes place at Genesys Banquet and Conference Center on Dec. 7.

Levoe had quite the storied career, winning back-to-back Class A state titles in the 800 meters as a member of Grand Blanc High’s track team in 2004-05. She also won two NCAA titles in the 800 at the University of Michigan, where she was a 10-time All-American. Gall also competed for the United States in the 2012 Summer Olympics in London.

Bauman is well-renowned as a runner. He was a distance runner in high school at Ainsworth before running for Mott Community College. He has also raced in 50-consecutive Boston Marathons — that’s the second-longest streak of alltime — and has also run in every Crim 10-mile race, Volkslaufe 20K race and Detroit Free Press Marathon since 1978. Bauman also formed the Riverbend Striders running club, is a group leader in the Crim Training Program and owns a Bauman’s, a running and cycling store.

Williams was a major part of Fenton’s athletic program for 31 years. His career started as a coach in 1940 and ended with his retirement as the Tigers’ athletic director in 1971. Williams touched many kids’ lives as a football, basketball, baseball and track coach during the 1950s. He took over as athletic director in 1955 and was honored to have the Fenton High football field named after him. He also served as Fentons’ city recreation director for 26 years.

Orvis is most know for his prowess on the gridiron. He played high school football at Flint Beecher before becoming an All-American at Colorado. He also enjoyed a 10-year career in the National Football League, playing for Detroit and Baltimore. This is his third hall of fame nod, as he is also a member of the University of Colorado and College Football Halls of Fame.

Hackett was a world champion artistic roller skater from Flint, earning 10 topthree finishes at the national level. She won the Senior Lakes Singles title in 1966.

Waters, a wrestler, won the 1983 Class A state title at 112 lbs. going indefeated at 54-0. He carried that over into the collegiate ranks at the University of Michigan where he was second at 118 lbs. in the 1985 Big Ten tournament. He placed third the following two seasons and then served as an assistant coach at Flint Northern, where the school won the 1995 Class A state title.

Another multi-sport athlete, Decker played basketball, volleyball and track for Fenton. She also played three seasons at Central Michigan from 1977-79, where she was inducted into the school’s Hall of Fame in 1991. Decker set collegiate records in the 3,200 run and still mantains four basketball school records. Decker also gained acclaim as Mid- American Conference volleyball Player of the Year in 1980 and still holds the school record for career kills.

Other honors went to Myers, who received the Distinguished Service Award for his lifelong contributions to sports. Myers played baseball at Flint Powers and Mott CC. He played baseball at Powers Catholic and Mott Community College before parlaying that into a front-office executive position with the Detroit Tigers. He now serves as the Tigers’ Director of Florida Operations from his base in Lakeland. He’s also dipped his toes into the world of basketball, arena football and golf.

St. Michael finished the 1969 football season with a 9-0 record, winning the Flint Area Parochial League championship ranked as high as No. 2 in Class C.

The hall of fame banquet is Dec. 7 at the Genesys Banquet and Conference Center. Tickets can be purchased by contacting Debbie Goyette at 616-729- 8545 starting Nov. 1.