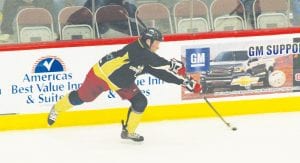 FLINT — For the first time since 2010, the Flint Generals took the ice at Flint’s Perani Arena on Saturday afternoon. No, the franchise hasn’t returned, but several of their legendary players laced up the skates once more for an alumni game between the Generals alumni and the Genesee County All- Stars. The Generals alumni won the contest, 4-1.

The game began with a few difficulties, though. Preceded by a high school game between Davison and Grand Ledge, the Zamboni came out to resurface the ice before the Generals alumni took the rink. About halfway through the process, a pipe burst in the Zamboni and left a red liquid streaked across the ice.

Eventually, a backup Zamboni came out and cleaned up the mess and the teams took the ice for warm-ups. After player introductions, which were announced by former Generals’ radio broadcaster Robert Roe, the arena unveiled a new banner, which capped off the history of Flint hockey, including both incarnations of the Generals, the Flint Spirits, Flint Bulldogs and the arena’s current suitor, the Michigan Warriors.

Once the game got underway, it was apparent that some players hadn’t skated in quite a while, however, there was no shortage of excitement. The Generals alumni set up several quality scoring chances and then finally buried one at the 3:25 mark of the first period as Todd Humphrey chipped one in from the right post to take a 1-0 lead for the Generals.

The Genesee County All-Stars responded about eight minutes later thanks to a familiar face to Lapeer natives. A few shots in front of the net set up Lapeer’s Bill Gibbons as he fired it home from the front of the crease to tie the game, which is what the score remained through the opening stanza.

Less than five minutes into the second period, though, the Generals got the eventual game-winner when Rob Valicevic pulled a deke to get open in the slot and sent a wrist shot into the top shelf for a 2-1 advantage.

Just moments later, Flint was back at it again. Brent Sullivan received a pass from behind the net and unleashed a wrist shot from the top of the faceoff circle, putting the Gens up 3-1. The final tally, with just 2:57 remaining, was scored by Generals’ legend Jim Duhart, who pulled a move to get open in front of the net before putting a backhand through the five hole for the game’s final tally.

Because of the delay, the game was only a two-period affair. Aside from five goals being scored in two periods, the goaltending play was outstanding on both ends of the ice.

Proceeds from the game were donated to the Old Newsboys of Flint and the Kris Perani Foundation, named after the late wife of former Generals’ legend Bob Perani, who also passed away in 2012. Skating for the Genesee County All-Stars was their son, Robert Perani, Jr., who wore Bob’s No. 1 during the game.