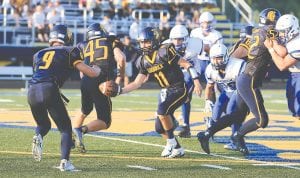 GENESEE COUNTY — Members of the Genesee Area Conference-Red – Goodrich, Lake Fenton and Corunna – were left on the outside looking in when they were informed that as of June 20, the remaining member schools, Durand, Montrose, LakeVille, Byron and Mt. Morris were leaving to form a new league. Joining the former GAC-Red schools in the newly created Mid-Michigan Activities Conference are New Lothrop from the Genesee Area Conference-Blue and Chesaning and Ovid-Elsie from the Tri-Valley Conference-Central.

LakeVille had returned to the GAC-Red after four years as a member of the Tri-Valley Conference- East, which is facing its own identity crisis with four schools fleeing to existing leagues. As the County Press reported in June, North Branch will join the Blue Water Area Conference in 2018. LakeVille was a member of the Red from 2002-2012 and belonged to the Flint Metro League prior to that. The 2018-19 school year will mark the third league LakeVille has competed in during a three-year span.

LakeVille Athletic Director Drew Johnson told the County Press on Wednesday how the new league has begun a dramatic domino effect that he speculates will reach across the entire state.

“Everything has changed so much,” said Johnson. “The schools that fit together so much 30, 40 years ago just don’t anymore. When we went to the GAC (effective 2017-18 season) we were happy, were excited about going back. New Lothrop is leading the new MMAC. They called LakeVille and told us about the new league. I talked to our new superintendent because we were now looking at being stuck with the Big 3, what will remain of the GAC. The more we talked about it, the MAC schools fit. We are all similar so it went from a situation where we were upset to one that looked like a really good decision for us as a district.”

Johnson said the MMAC will be good for all the schools that are joining as new members.

“We know this is going to be a very competitive league and I want to emphasize that we don’t leave leagues to find more wins. We go because we want to be a school that others can compete with,” said Johnson. “This is a competitive league and it will allow us to continue to grow our programs and allow our kids to compete. It’s a quality fit for all the schools. We’re really excited and we’re all going to put a constitution together that will benefit all of the schools in the new MMAC.”

Johnson was absolutely correct about the domino effect. Dave Davis, athletic director at Goodrich detailed what has transpired for Goodrich as it seeks a solution for its student-athletes.

The move still leaves the GAC – both divisions included – with nine schools. However, there is one major problem; enrollment differential. The three remaining schools in the Red – Goodrich, Lake Fenton and Corunna – all have enrollments between 600-800. The schools left in the Blue – Atherton, Bendle, Bentley, Flint Beecher, Flint Hamady, and Genesee – are all below 400 students. Genesee, in particular, only has 188.

“With superintendent support, Goodrich, Corunna and Lake Fenton contacted the Flint Metro League to see if the FML would accept all three of us and expand to 12 schools,” said Davis. “It looks like the FML will not approve an expansion. The expansion would require several by-law changes to occur within the FML constitution regarding enrollment and sport offerings. Additionally, a two-division format would need to be developed to address a conference with 12 schools.”

The three schools are obviously looking at all possibilities and have contacted TVC schools such as Frankenmuth, Birch Run and Millington about forming a brand-new conference. However, according to Davis, the notion has ‘not gained any significant support among upper levels of administration.’

The smaller portion of the GAC is also looking at alternatives to stay afloat. They’ve reached out to Bridgeport, Genesee Christian and Saginaw Nouvel to see if those schools would like to join following a departure of Goodrich, Corunna and Lake Fenton.

As far as Millington, it could be the odd-school-out as far as many districts are concerned. Johnson was pointedly honest about its fit in any league going forward.

“Millington, in order to be a member of a league or conference anywhere where schools have to work together, provide good sportsmanship and community involvement, has to work on some issues with its reputation and how they handle themselves,” Johnson said. “Schools are hesitant to accept Millington because of some of their sportsmanship issues (directly involving LakeVille as an opponent) that have come up over the past couple years. I want to be clear on this. Millington has quality people, but they need to step back and look at why conferences don’t want them to be part of their group. I have a lot of respect for their AD, Jeff York, and their high school principal. They are truly trying to bring the high-quality character and sportsmanship back to their school.”

Davis noted that the Metro League was to have its annual meeting late in the week and that much of this is still fluid as far as Goodrich, Lake Fenton and Corunna finding a new league or having success in creating yet another league in the area that would mean the last of the GAC-Red.

In a letter to his high school coaches, Davis stressed the need for patience.

“I know there are multiple scenarios that look good in theory on the back of a napkin but ultimately this is a complicated process that may take some time to work out the details and address the needs of each district individually,” Davis said.