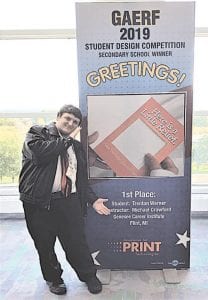 Trenton Warner, a senior at Bendle High School and a visual communications student at Genesee Career Institute, poses with a sign depicting his winning entry in the 2019 Graphic Arts Education and Research Foundation Student Design Competition during the 2019 Print Conference in Chicago. His greeting card design incorporated bubble wrap as a stress reliever. Photos provided by Genesee Career Institute

BURTON — How often have you been stuck in traffic, annoyed and wishing you had a stress reliever?

That’s how Bendle High School senior Trenton Warner got the idea for the greeting card that recently received top honors in the 2019 Graphic Arts Education and Research Foundation Student Design Competition. The competition included 287 students from across the country who were asked to design and produce a printed greeting card for the occasion of their choice. Warner chose the topic of stress and had the creative idea to incorporate bubble wrap into his card’s design so the recipient could pop the bubbles to relieve stress.

“The idea of using bubble wrap within my card design was heavily influenced by my own personal life,” Warner said. “My mother has road rage and talks a lot about putting bubble wrap on her steering wheel to help with her road rage. I also pop bubble wrap to relieve my own stress, at least when bubble wrap is available to me.”

Warner became interested in graphic arts from watching cartoons. He said watching the lines and colored shapes move in such a lifelike way made him want to draw and eventually even animate. When he was in eighth grade, he took a tour of the graphic arts areas in Genesee Intermediate School District’s Genesee Career Institute.

“I saw the projects other students were working on and set a goal to attend there myself one day,” he said. “When I did, I fell in love with GCI’s visual communications class, and it confirmed that my interest in art and design could become both a future career and profitable.”

Michael Crawford, marketing and visual design communications teacher at GCI, said five designs were created by GCI students and entered in the competition for the first time.

“Trenton’s greeting card was an instant favorite,” he said. “Many students were drawn to it and connected with it. Everyone who saw it wanted to pop the bubbles of the bubble wrap inside the card.”

Warner won an all-expenses paid trip to the 2019 Print Conference in Chicago where he received his award of $2,000. Warner’s card design was showcased in several areas at the event in Chicago. It also was featured on the APTech website.

This is the first national contest Warner has entered. While at GCI, he also entered a SkillsUSA Competition for creating a Michigan-themed trading pin, for which he won third place at regionals. He also has entered a few smaller competitions on social media that were hosted by “Youtubers” who offered small giveaways.

“But nothing compares to this recent national recognition and $2,000 win,” he said.

Warner said his plans for after high school may include some college, but his dream is to start his own print shop for designing shirts, hats and other types of clothing.

The mission of the GAERF is to help develop the next generation workforce for the graphic communications industry.