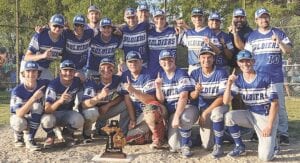 BURTON — The greatest baseball season in Genesee Christian history got a little bit better as the Soldiers advanced to Saturday’s Regional Finals against Ottawa Lake Whiteford, June 12 at Adrian College.

Although Genesee Christian lost to Ottawa Lake Whiteford, 8-3, but it was the end to a dream season for the school, which has never won a District baseball title, but this season gave them the chance to be true contenders.

Seth Kish led the victory over Oakland Christian with two hits and three RBIs. He delivered the biggest blow of the game when his bases-loaded double in the fourth inning cleared the bases and erased Oakland’s 2-0 lead.