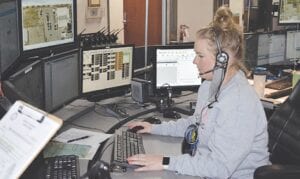 At the May 4 special election, Genesee County voters will decide whether to support a surcharge renewal on all landline, wireless and voice over internet protocol service devices to fund 911 emergency call answering and dispatch services within Genesee County, including facilities, equipment, maintenance and operating costs.

If approved by voters, the surcharge renewal will continue to assess a charge of $1.86 per month for a period ending on Dec. 31, 2026 and generate between $7 to $8 million annually. The surcharge itself is a fixed rate that was approved in 2017 by Genesee County voters and accepted by the State of Michigan.

Spring Tremaine, Executive Director of Genesee County 911, said that the surcharge is Genesee County 911’s only source of income, helping the department to keep up to date with equipment and covering the salaries of 50 dispatchers and other staff.

“The surcharge funds us 100 percent, including our labor costs, operations, equipment and the nine towers we maintain in the county,” she said. “Our existence is totally dependent on that funding.”

Tremaine said that the surcharge’s sunset date will occur on Dec. 31., requiring Genesee County 911 to get the issue on the ballot this May to avoid running out of surcharge funding by the end of the year.

“We were hoping that the state would have by now done something with the sunset date, maybe extending it or modifying the formula,” she said. “If we waited too long and tried to put the issue on the ballot in November 2021, our money would have run out before we could actually get the state to reallocate that surcharge. We spent a lot of 2020 trying to organize our plan for the surcharge renewal and decided that reaching out with a ballot proposal was the best course of action.”

If the surcharge renewal fails to pass on May 4, Tremaine said that municipalities, townships and villages would each have to pay substantial amounts to cover the $7 million needed annually for 911 services.

Currently, Genesee County 911 has around $3 million in savings to operate with in case the surcharge renewal doesn’t pass, which would support the department for only about six months.