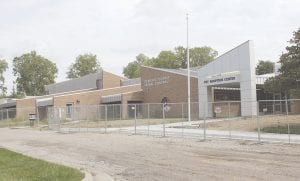 The exterior of Genesee County Animal Control as it undergoes an $8.2 million expansion. Photo by Gary Gould

As part of the $8.2 million renovation and expansion of its facility, Phase 1 has been substantially completed.

The closure allowed for the move of animals and administrative staff into the new facility. With this move, work will begin on Phase 2, the renovation and expansion of the original portion of the building.

The facility was supposed to reopen Sept. 5, but workers needed more time. Normal business hours will resume Sept. 10 from 12-6 p.m.

The 40-year-old facility was state of the art in 1975 but needed a number of upgrades and additional space.

“The animals will have larger cages,” Wallace said in a presentation to the Genesee County Board of Commissioner in 2018. “There will not be one cage on top of the other as there is now, except in some puppy areas. Some of the dogs now don’t like to be up high and some cats don’t like to be on bottom.”

Though the capacity for animals will remain about the same, there will be a new section in two rooms put up in the space with cat colonies.

There will be a new meet and greet room where people can play with animals before deciding to adopt them.

Each pet living quarter will have its own air supply after the expansion, to cut down on infectious diseases being transmitted between animals.

Wallace said in 2018 the facility will have more space for each individual animal for their own comfort.

The shelter gets about 3,000 animals per year, and the comfort of the animals will improve dramatically with the transformation, said Wallace.