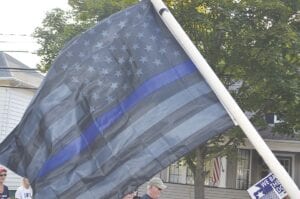 An example of a Thin Blue Line flag, as flown in a 2020 “We Back the Badge” parade in Flushing. File photo

FLINT — Genesee County has passed a resolution to clarify which flags can be flown at county buildings, following controversy over a proposal to display the Thin Blue Line flag during Police Appreciation Month.

Last Wednesday, the Genesee County Board of Commissioners unanimously approved a resolution to ban the placing of issue-based flags on county government property. Under the new measure, only the United States flag, the State of Michigan flag and the Genesee County flag will be flown at county facilities.

At the May 12 Genesee County Board meeting, Commissioner Shaun Shumaker (R-Fenton Township) proposed a county resolution to recognize May as Police Appreciation Month and to fly the Thin Blue Line flag on county buildings to honor police officers who have been killed in the line of duty.

However, the resolution to display the Thin Blue Line flag faced backlash from many county residents who attended the May 12 meeting. Opponents of the flag said that it carries racist overtones, in part because it has been used or displayed by some extremist and white supremacist groups.

“I’m 100 percent in support of our police officers and the work that they do in the community,” Nolden said at the May 12 meeting. “I’m just not in support of flying the Thin Blue Line flag.”

Residents and commissioners who supported the flag also spoke during the meeting, saying that the history behind Thin Blue Line does not embody racism but instead represents law and order and memorializes police officers who have fallen in the line of duty.

“I proposed (this flag) because I wanted to let (police officers) know that Genesee County is a place where they want would want to come to work,” said Shaun Shumaker. “It’s sad that this has been politicized.”

Commissioner Debra Newman (D-Swartz Creek), a retired police officer, said that she was disappointed by how the board was handling the controversy.

“We asked to fly the flag for one week out of the year to honor law enforcement,” she said. “It’s just sad…that we have all this animosity at a time like this. We need to unite, come together and work through this.”

On May 26, commissioners approved a motion to ban the display of all issue-related flags on county property. Commissioners also unanimously approved a separate resolution recognizing May as Police Appreciation Month, albeit without displaying the Thin Blue Line flag at county facilities.

See related Letter to the Editor in today’s