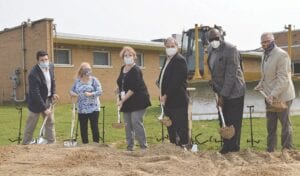 FLINT TWP. — Genesee County is moving forward with a new facility and a revamped vision for its juvenile justice system.

On Sept. 16, Genesee County officials and judges broke ground at the site of the future Juvenile Justice Center on Pasadena Avenue in Flint Township. The new $20 million building will be located on the grounds of the current Genesee Valley Regional Center (GVRC), which has served as a detention facility for court-involved youth since the 1950s.

Although plans for a new juvenile facility have been in the works for years, 11 local judges accelerated the process by signing a petition to county commissioners and unanimously requesting for the project to take place. Around four years ago, the county also turned over operations of GVRC to the courts. 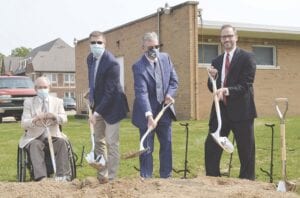 Circuit Court Judge John Gadola, one of the 11 judges who signed the petition, said the new facility will focus on rehabilitating and educating juvenile offenders, rather than detention alone.

“As data changed and methods of treatment changed, we were pushing toward having a more data-driven, rehabilitative facility that could still house people and keep the community safe,” said Gadola, who presides over the Family Division in Genesee County. “Juveniles will still be detained here if necessary, but on the other end of the spectrum, we’ll have a school run by the court to educate every kid who is here. Whether they are here on probation and living at home or in detention.”

Juvenile offenders who enter the facility will also be taught essential life/behavioral skills and have the chance to include their parents or guardians in the treatment process.

Once completed, the 48,500-square foot building will house up to 48 juveniles between the ages of 10 to 18. The county will then demolish the current GVRC facility, which was built during the 1950s and 1960s.

Martin Cousineau, chairman of the Genesee County Board of Commissioners, said that having the new facility will help to bring the county up to date with juvenile justice, while ultimately reducing costs.

“Parts of the current facility are 50 to 60 years old and are just not functional for today’s needs,” he said. “We’re also paying a lot of money to other counties and states to house some of the kids we have here currently. This (the new building) will be an important piece to bringing the county back into the modern era.”

Cousineau said that the Juvenile Justice Center will be completed by late 2021 or early 2022. The cost of the project will be covered by the issuance of bonds.