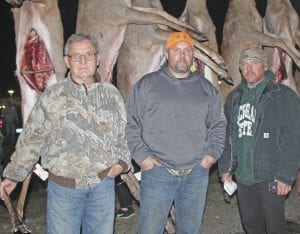 Genesee County buck pole winners Don Koon, Joe Gilson and Thomas Sheroski pose for a group shot after being announced as the top three winners at Madden’s Lounge in Davison on Tuesday night.

A total of 13 bucks were entered by nightfall and Don Koon of Atlas won the top prize with his buck that he bagged in Genesee County around 10:20 a.m. Joe Gilson was runner up. The Lennon resident was hunting in the Clio area and bagged his buck at 7:15 a.m. Third place went to Thomas Sheroski of Davison, who was hunting on family property in the Davison area. He bagged his buck around 7 a.m.

SCI president Dennis Gepfrey presented the awards with a 20 gauge shot gun donated by Marty Madden and two shoulder mounts up for grabs among the three winners. Numerous other prizes, gift certificates, deer processing and a trip to Mexico were also handed out. Hicks Outdoor, Williams Gunsight and Outfitters, Whitey’s restaurant, the National Wild Turkey Federation and several meat procesors also donated. That’s the short list of local businesses who stepped up to donate prizes for the annual fundraiser.

Opening day was a brisk, chilly morning that morphed into a rare 60-degree day that fell to 40 degrees by the 9 p.m. hour.

All deer, unless specified otherwise, were taken to Mark Thomas Processing in Davison. Thomas partners with SCI each year on meat processing.