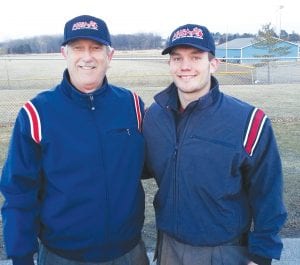 Jack Miles of North Branch is the official trainer for the Genesee County Coaches Officials. He is mentoring two Lapeer baseball players in officiating through the Michigan High School Athletic Association Legacy Program.

Incoming Lapeer High senior Jacob Williams and Alex Taylor, a Lapeer East and Northwood grad, now a new umpire, are being mentored by Miles. Miles is a former three-sport North Branch Wesleyan Academy coach of baseball, basketball and football, and a 43-year referee.

Miles, who works the Lapeer and Genesee County high school and Great Lakes Intercollegiate Athletic Association (GLIAC) fields, is the current trainer for the Genesee County Coaches Officials and an instructor at the Southeast Michigan Umpire Camp. He’s also a high school basketball official during the winter months.

“I’ve been officiating since the 70s – 1972 – and registered in 1999 with the MHSAA to become certified with them,” said Miles. “I had coached at Wesleyan Academy, coached three sports, baseball sub-varsity, varsity basketball and JV football from 1993-1999. When my son graduated, all the officials told me it was time to ‘come to the dark side.’ ”

Miles took that next step and hasn’t looked back.

“Giving back is what I like. I really like to be involved and give back. There is legacy for all the sports, but I have chosen to stay in one sport. The pipeline in our field is not being filled because a lot of the officials are aging out or moving on,” said Miles.

The MHSAA says that it annually receives registration by more than 10,000 officials and had 10,305 during the 2014-15 school year. The highest number registered for basketball, 4,449, with football, baseball and softball all with more than 2,000 registered.

Miles hopes others see this story and want to get involved to help fill the ranks.

“The two I am officiating referee at the lower level,” explained Miles. “We try to get them involved in summer ball to get them looks, and games. The Legacy kids, we try to get them games for the experience. We rotate behind the plate and in the field during games and start them at seventh- and eighthgrade games.”

Miles said the mentoring is important, especially as the Legend kids learn and grow into quality officials.

“Everyone expects them to be perfect,” Miles said. “But how can they be perfect just starting out? They have to learn, but so much pressure is being put on the official and even at the college level, 50 percent of the people will disagree with every call you make. Different areas have better officials and it all depends on the training that each association is providing. Some officials don’t belong to an association and are considered subcontractors, so there are lots of options.”

“That’s what nice about the Legacy program, the assigners can pair the Legacy referees up with veteran officials,” said Miles. “There are also three referee camps and we strongly recommend our Legacy kids go through those camps for baseball officiating. They learn all the different angles, how to cover the bases properly and so much more.”

Miles said that officiating also gives back to the kids who are giving back to their sport.

“These are kids who want to be involved in the sport,” Miles explained. “Alex works for Sky Electric. He was a catcher in high school and he is putting back into the sport. It’s also good extra money for the kids because for two hours, they can earn from $45 to $100 a game, so it’s nice money for a high school kid and to continue to give back is just so rewarding for them.”

Williams is at the beginning of the process as the Legacy program is open to high school juniors and seniors.

“Jacob will be a first-timer in the Legacy program,” said Miles. “He is experienced in rec ball and now we are mentoring him. He will attend training in August and in the winter he will attend one of the camps. After that we will assign him sub-varsity and middle school games with an experienced umpire. Once they reach college we continue to stay with the Legacy kids and get them into the intramural games, which helps them continue their learning and also helps pay for books and college.”

Miles said officiating also teaches a lot of life skills, much like the sports the kids participated in.

“Life skills comes from officiating, such as how to deal with adversity, how to handle and communicate with coaches. As the seasons and levels of play continues, emotions, parents, coaches, players, that’s all positive.”

Another positive that Miles hopes catches on is getting rid of the nickname “Blue” for referees.

“We are working to not be called Blue anymore,” Miles said. “There is a change to eliminate the nickname and go by umpire, ref, or our name. Overall, the nickname Blue, it’s not a positive. The way I handle it, during MHSAA sports I consider it an extension of the classroom. Mr. Miles rather than Hey, Teach. The parents and the coaches and the kids are all part of my classroom. Unfortunately, sometimes a player or coach has to go to the principal’s office.”

Mentoring the younger officials is also part of the culture change that Miles is so passionate about.

“Any kids who are interested in learning our trade can go to www.mhsaa.com and the Genesee County Coaches Officials Association (www.gccoa.us). They can go there to find more info about other sports and contact the current officials through that to get set up with a mentor,” Miles said.

Officiating isn’t for everyone, Miles stressed.

“What makes a good candidate for officiating?” he pondered. “Past athletes who have the knowledge of their sport and the discipline. A people person, somebody who is a multitasker. They should be involved in sports and have that competitive drive. And, Miles said with a smile, a good sense of humor goes a long way.”

“Again, it’s good weekend money,” Miles said. “A referee can make $80 in four hours. We don’t do it for the money, but it does help cover the costs of travel, uniforms et cetera. It’s also just a great brotherhood. It’s a great organization of helping each other.”

People who like to travel will also enjoy refereeing, added Miles.

“We go as far as Mt. Pleasant and Midland and Imlay City and Genesee County,” Miles said. “On any given week, we are short on officials, especially for basketball and baseball during the summer. And, it’s important to note, they can’t play without us. We are an integral part of all of these sports. We just want to keep the legacy going. Our way to keep giving back is to grow our organization. It’s so exciting to stay involved in the high school sports once the college seasons are