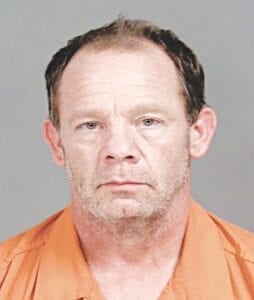 GENESEE COUNTY — A Genesee County man is facing charges for allegedly victimizing an individual with special needs and possessing drugs.

John Allen Smith, 53, has been charged with two 20-year felonies for financial exploitation and possession of methamphetamine. Smith was arrested over the Fourth of July holiday by the Genesee Human Oppression Strike Team (GHOST) and arraigned on July 7.

Genesee County Sheriff Chris Swanson said that the victim, a 22-year-old woman with cerebral palsy, had been placed at a hotel outside the county by a local church because she had nowhere else to go. He said that Smith approached the victim as soon as she settled in at the hotel and immediately began taking advantage of her.

“While she was being dropped off at the parking lot, John Smith met her,” Swanson said. “From there, he asked why she was at the hotel. She told him she was being housed there because she had nowhere to go. That was the open door.”

Swanson said that Smith moved into the victim’s hotel room on June 25 and talked her into signing over one of her SSI checks to him. Smith then allegedly used the money to buy food and pay his own rent.

Swanson said that a nurse at a local hospital contacted GHOST to alert them about the victim’s situation at the hotel. Investigators interviewed the victim and took her to a hospital for treatment and care before arresting Smith.

“Be aware of people around you who are vulnerable and have special needs,” Swanson said. “They are the ones predators seek to extort and exploit.”

GHOST is also investigating an exploitation case involving a 21-year-old special needs woman who was being trafficked for sex outside the county.